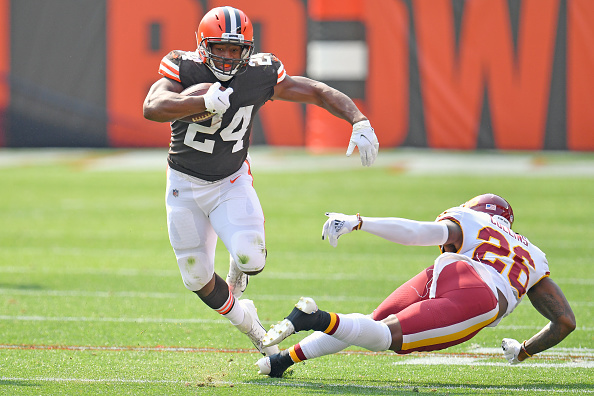 CLEVELAND, OHIO - SEPTEMBER 27: Running back Nick Chubb #24 of the Cleveland Browns breaks a tackle from strong safety Landon Collins #26 of the Washington Football Team as he runs for a first down at FirstEnergy Stadium on September 27, 2020 in Cleveland, Ohio. (Photo by Jason Miller/Getty Images)

BEREA, Ohio – Cleveland Browns guard Joel Bitonio, running back Nick Chubb and defensive end Myles Garrett have been voted to the 2021 Pro Bowl. Bitonio and Garrett were selected as starters for the team.

Roster selections are determined by the consensus votes of fans, players and coaches. Each group’s vote counts one-third toward determining the 88 All-Star players. The NFL is the only sports league that combines voting by fans, coaches and players to determine its All-Star teams.

Bitonio, the longest-tenured member of the Browns, has been named to the past three Pro Bowls. He is the first Browns guard to be selected to three consecutive Pro Bowls since Pro Football Hall of Famer Gene Hickerson made six consecutive from 1966-71. Bitonio anchors a Browns offensive line has helped the Browns rank among the league leaders in rushes for 10-plus yards (first with 68), rushing yards (third with 2,137) and fewest sacks allowed (third with 18).  He has also opened holes and helped Nick Chubb (931) and Kareem Hunt (793) become the only pair of teammates in the NFL this season with at least 750 rushing yards.

“It’s always an honor and a humbling experience when you’re recognized by your peers, NFL coaches and the fans,” Bitonio said. “The Pro Bowl really is a team honor, especially for a lineman, and I know I wouldn’t have got this recognition without everyone else on the offensive line, everyone in that huddle and all of my teammates. I also want to thank the great fans of Cleveland who voted us.”

Despite missing four games this season, Chubb ranks fifth in the NFL with 931 rushing yards and tied for sixth with 10 rushing touchdowns. He currently ranks second in the league with 11 rushes of 20-plus yards and he’s fourth in the NFL with 30 carries for 10 or more yards. Chubb, who was named to his first Pro Bowl last year, is the first Browns running back named to the Pro Bowl in consecutive season since Mike Pruitt in 1980-81.

“I’m really happy for Myles and Joel,” said Chubb. “Everyone on the team plays a part in people being named to the Pro Bowl and I know we have lots of guys on our team that are deserving of this honor. For me, it’s all about the team, not individual honors. All of our goals are still out there in front of us and that’s what we are focused on.”

Garrett ranks among the league leaders in strip sacks (tied for first with four), fumble recoveries (tied for second with two), forced fumbles (tied for third with four) and sacks (tied for fifth with 11). Garrett, who was also named the Browns 2020 Walter Payton Man of the Year, is the only Brown with multiple double-digit sack seasons and he has three (13.5 in 2018, 10 in 2019, 11 so far in 2020).

“This Pro Bowl nod means so much more than an individual accolade,” said Garrett. “This is due to the collective efforts of the Cleveland Browns organization and the city itself. The hard work and sacrifice of our frontline workers, city officials and so many others allowed us the opportunity to play football in front of our deserving fans in 2020. I am incredibly honored to be representing the Browns and the City of Cleveland in the Pro Bowl for the second time. I can’t wait to see where our hard work takes us next.”