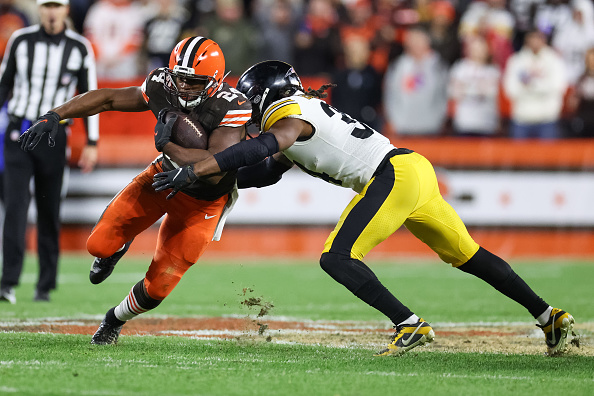 CLEVELAND, OHIO - SEPTEMBER 22: Nick Chubb #24 of the Cleveland Browns rushes ahead of Terrell Edmunds #34 of the Pittsburgh Steelers during the third quarter at FirstEnergy Stadium on September 22, 2022 in Cleveland, Ohio. (Photo by Gregory Shamus/Getty Images)

Myles Garrett, Joel Bitonio and Nick Chubb will all represent the Browns as 2023 Pro Bowlers

The Browns will be sending three players to Las Vegas for the 2023 Pro Bowl Games.

DE Myles Garrett, G Joel Bitonio and RB Nick Chubb will all represent Cleveland, and each of them will have gone to the Pro Bowl together for the third consecutive season.

The Pro Bowl Games is a new format the NFL implemented for Pro Bowlers this season and will feature skills competitions and a non-contact flag football game, which will take place Feb. 5 at Allegiant Stadium in Las Vegas and will be televised on ESPN/ABC.

A sixth-year veteran and now a four-time Pro Bowler, Garrett once again spent most of the season in pursuit of the top spot on the league’s sack leaderboard. He currently sits third in the league with 13.5 sacks, two sacks behind San Francisco’s Nick Bosa, with three games to play and has a chance to beat the Browns’ single-season sack record he set last season with 16 sacks. He broke the Browns’ all-time career sack record in Week 6.

Bitonio was voted to his fifth straight Pro Bowl and maintained his status as one of the most dominant guards in the NFL. He’s second among guards with an 86.7 overall grade from Pro Football Focus and also ranks seventh among guards with a 95 percent pass block win rate, according to ESPN. A second-round pick in 2014, Bitonio also hasn’t missed an offensive snap since the 2016 season.

Chubb was voted to his fourth straight Pro Bowl and has made another run toward the league’s rushing title. He sits third in the NFL with 1,252 rushing yards and is tied for third with 12 rushing touchdowns, which is tied for his career high. Chubb also moved up to fourth on the Browns’ all-time rushing leaderboard earlier this season.