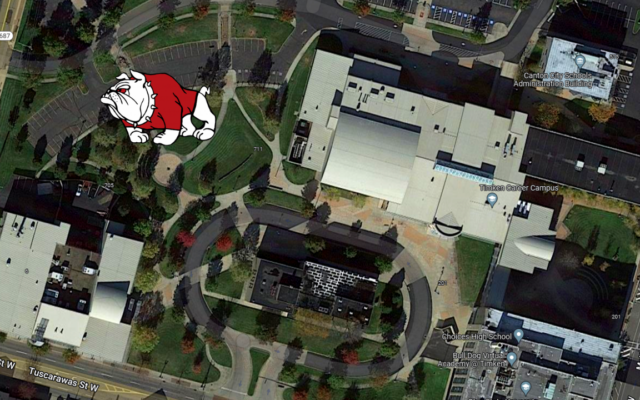 It’s an ambitious plan that would ultimately move Mckinley High School to downtown Canton.
Canton School Superinendent Jeff Talbert presented a proposal for the district to the school board last night.
It is the next phase of his Design for Excellence plan. Not only does the plan involve moving the high school, it would create more K-6 buildings and they would then close several buildings too. He says the district would continue to use Tom Benson HOF Stadium, the Fieldhouse and Natatorium.
The entire plan would need some help from taxpayers in the form of a bond issue on the ballot in May.   They plan to hold community meetings.
We’ll find out more details in depth when Superintendent Talbert joins Canton’s Morning News Friday at 6:45am.

Superintendent Jeff Talbert presented the next phase of his Design for Excellence Plan to district staff and the Board of Education on Wednesday.
In it, Talbert proposes a new high school on the Downtown Timken Career Campus, more buildings with a Kindergarten through sixth-grade configuration, including two new K-6 buildings, and the closure of several facilities.
The current high school building, he said, now sits in the middle of Hall of Fame Village and it has proven to be a significant distraction to students.
“But this is not what is driving this decision,” he emphasized. “It is certainly a part of it, but McKinley is a 1975 building. Our science labs are ancient. Add to that the addition of a water park, sports gambling, and other tourist attractions, and we can see that it is not an ideal place to operate a high school.”
The district will continue to use Tom Benson Stadium, the Memorial Fieldhouse, the Natatorium, the new Turk Alberta locker rooms, and the auxiliary gymnasium, should the new high school get built downtown.
In a district-wide survey last year, families and staff expressed a preference for K-6 buildings, Talbert said. However, most of the district’s elementary buildings could not accommodate that many grade levels. Currently, AIM Academy, Arts Academy, Patrick, and Worley are K-6 buildings.
Talbert’s plan would create eight K-6 buildings over the next several years.
“We want to construct a brand new K-6 building on the Souers site in the southwest quadrant of the city, and also build a new K-6 building on the Mason Site in the northwest quadrant,” he said.
In addition, he proposed a 40,000-square-foot addition and remodel of Madge Youtz Elementary in the northeast quadrant.
With the addition of these three larger facilities, the district would close Belle Stone, Schreiber, the Business Center/Warehouse, Baxter, and Dueber. Souers and Mason will be demolished for the new buildings.

This plan, he said, would create efficiency by reducing duplication and create significant savings by eliminating the deferred maintenance on buildings that are in some cases, over 90 years old.
But that alone will not pay for the new buildings.
Talbert went on to explain that the last bond issue that funded the building of Lehman, Cedar, McGregor, Patrick, AIM (Belden), and Worley, expires in 2023. He is proposing a renewal of those bonds. Other avenues include Certificate of Participation Financing, secured by TIF revenue from Hall of Fame Village and Permanent Improvement funds. Other funding sources and partnerships are being explored, as well.
Talbert said he plans to hold community meetings to discuss the plan before moving forward. He added that no discussions have happened in regard to the sale price of the current McKinley building.
The timeline for completion of the project is the Fall of 2027.