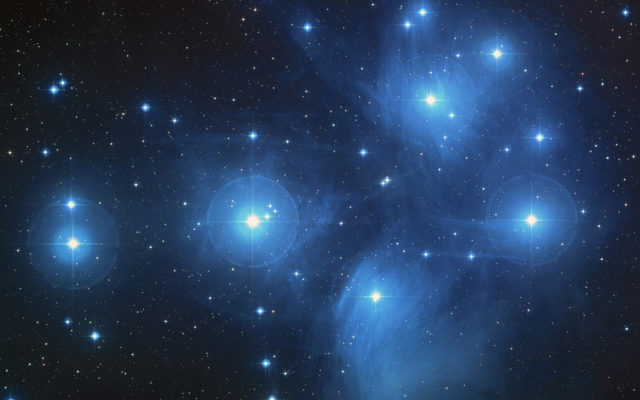 The brilliant stars seen in this image are members of the popular open star cluster known as the Pleiades, or Seven Sisters. The Hubble Space Telescope's Fine Guidance Sensors refined the distance to the Pleiades at about 440 light-years. The Fine Guidance Sensors are at the periphery of Hubble's field-of-view. They trace a circumference that is approximately the angular size of the Moon on the sky. They are overlaid on this image to give a scale to Hubble's very narrow view on the heavens.

Actor Nick Cordero has died from complications of coronavirus.  He is the husband of Glen Oak graduate Amanda Kloots who has been posting about his health situation since he was initially diagnosed in late March.  He had to have his leg amputated and was in a coma for most of the last thre months.  Nick Cordero was 41.

Nick’s best friend and former “Bullets Over Broadway” co-star, Zach Braff was heartbroken by his death. he shared “I can honesty tell you I have never met a kinder human being,” the Scrubs actor added, “Don’t believe that Covid only claims the elderly and infirm. I am so grateful for the time we had.”

Lin-Manuel Miranda shared “Devastating. What a loss, what a light. Whole heart with Amanda and his family tonight.”