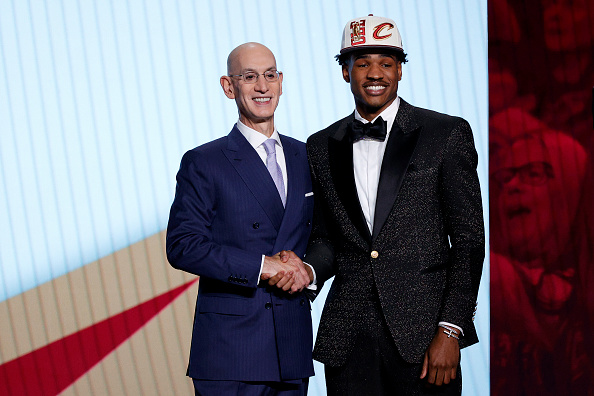 NEW YORK, NEW YORK - JUNE 23: NBA commissioner Adam Silver (L) and Ochai Agbaji pose for photos after Agbaji was drafted with the 14th overall pick by the Cleveland Cavaliers during the 2022 NBA Draft at Barclays Center on June 23, 2022 in New York City. NOTE TO USER: User expressly acknowledges and agrees that, by downloading and or using this photograph, User is consenting to the terms and conditions of the Getty Images License Agreement. (Photo by Sarah Stier/Getty Images)

The 6’6, 215 pound senior averaged 18.8ppg and shot 41 percent from the 3-point line in leading the Jayhawks to the National Championship and winning the Most Outstanding Player award at the Final Four this past season.  Agbaji also was named the Bg 12’s Player of the Year.

Agbaji (6-5, 215) started in all 39 games this past season as a senior at Kansas, averaging a Big-12 leading 18.8 points and 5.1 rebounds in a team-high 35.0 minutes. Agbaji finished second in the Big-12 in three-point percentage (.409) and three-point field goals made per game (2.64). He helped lead Kansas to its fourth national championship in program history under head coach Bill Self and was named the 2022 NCAA Tournament Most Outstanding Player. Agbaji also finished as a 2021-22 consensus All-American First Team selection as well as the 2021-22 Big 12 Player of the Year.

Mobley (6-10, 240) appeared in 32 games (all starts) as a sophomore for USC this past season, averaging team-highs in points (14.2) and rebounds (8.3) in 34.0 minutes. Mobley started in all 64 of his career games for the Trojans and held career averages of 12.0 points, 7.8 rebounds and 2.5 assists. His brother Evan Mobley was an NBA All-Rookie First Team selection for the Cavaliers this past season and was selected with the 3rd pick by the Cavaliers in the 2021 NBA Draft.