AKRON (News Talk 1480 WHBC) – An Akron man took the stand during his own murder trial yesterday, admitting he choked a Massillon woman to death and set her body on fire. Today an Akron Jury found 47 year old Daniel Jones guilty for the murder of 44 year old Kerri Blondheim. Her body was found atop a burning mattress dumped along a road in the city of New Franklin. Every bone in her neck was broken. Jones is scheduled to be sentenced on Tuesday, February 25. 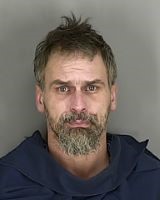