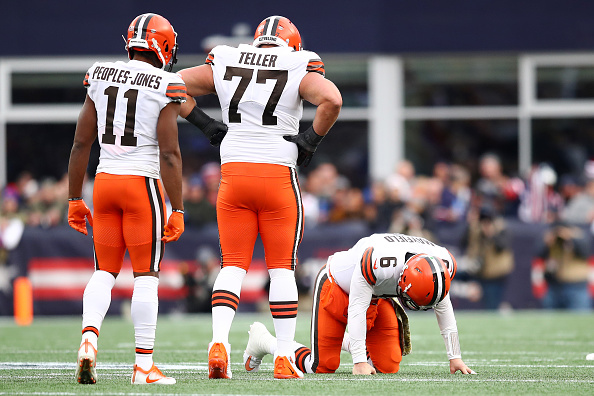 FOXBOROUGH, MASSACHUSETTS - NOVEMBER 14: Baker Mayfield #6 of the Cleveland Browns reacts after sustaining an injury during the third quarter against the New England Patriots at Gillette Stadium on November 14, 2021 in Foxborough, Massachusetts.

What started as a promising day with an impressive opening drive and a 7-0 lead for Cleveland, turned miserable after that, as the Patriots scored the next 45 points in route to demolishing the Browns 45-7 in Foxboro.

The turning point in the game came in the second quarter, with the game tied 7-7,Baker Mayfield threw an interception that was returned to the Cleveland 5 yard line. On the very next play New England scored and took a 14-7 lead and never looked back.

Former McKinley Bulldog and New England offensive coordinator Josh McDaniel’s offense put together three 90+ yard drives in the win, including a 99 1/2 yard drive to make it 21-7 in the second quarter.

Baker Mayfield had to leave the game in the third quarter after taking a big hit on a pass attempt. He suffered a right knee contusion and did not return, as Case Keenum finished the game. Mayfield said he hopes to play next Sunday.

His numbers were miserable on the day, completing just 11 of 21 passes for 73 yards, one touchdown to Austin Hooper, and that costly interception.

The Browns defense was even worse, allowing the Patriots to convert on 7 of 9 third down plays and gave up 452 yards and 30 first downs in the loss.

Pats Rookie quarterback Mac Jones was near perfect, completing 19 of 23 passes for 198 yards with 3 touchdowns and no interceptions.

With the loss the Browns fell to (5-5) and will host the winless Detroit Lions next Sunday.

New England improved to (6-4) on the season.