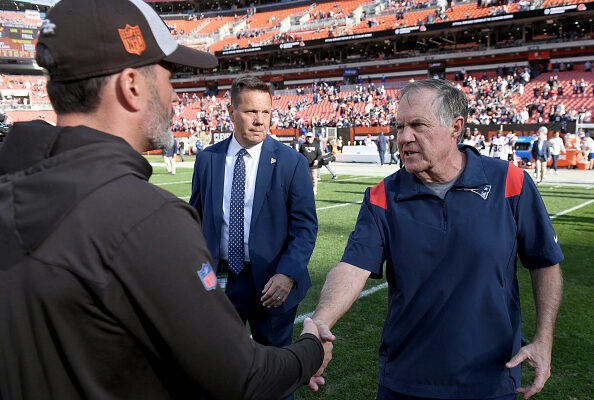 Bill Belichick’s Patriots came into Cleveland and out played the Browns, out coached the Browns and out every  thinged the Browns in a 38-15 win on Sunday. The victory was the 324th of Belichick’s career, tying him for second place on the NFL’s all-time list with legendary Bears coach George Halas.

Cleveland never led and the Pats defense held the Browns to a season low 70 yards rushing.

The only touchdown for the “Orange and Brown” was a 15 yard td pass from Jacoby Brissette to Amari Cooper with 6:17 left in the game.

Brissette had a miserable day completing just 21 of 45 passes for 266 yards, with 1 td, but 2 interceptions.

Nick Chubb was held to just 56 yards on 12 carries.

Next up for the (2-4) Browns, a road game Sunday in Baltimore.

The (3-3) Pats will host the Bears on Monday night football.