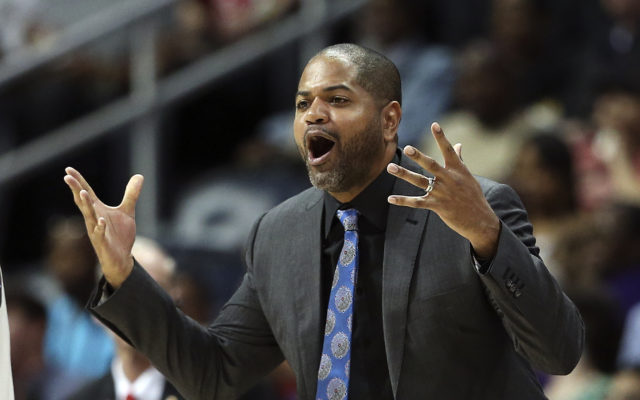 Houston Rockets head coach J.B. Bickerstaff argues with an official in the second half of an NBA basketball game against the Atlanta Hawks, Saturday, March 19, 2016, in Atlanta. (AP Photo/John Bazemore)

“We are very fortunate to have someone of J.B.’s caliber and basketball pedigree lead our franchise as head coach,” said Altman. “His wealth of experience, coupled with the respect he has garnered around the NBA and with this team, has made for a seamless transition from associate head coach to head coach. The amount of grit and determination instilled in our players, from both an accountability and attention to detail standpoint over this short period of time, has been met with admiration, respect and overall excitement throughout our entire locker room. We have already observed the impact he has made on our players through his first 10 games as head coach and we are looking forward to seeing just how far he can effectively drive our developing culture and lead this franchise into the future.”

Bickerstaff, who entered the season as the Cavaliers’ associate head coach, was named the 23rd head coach in franchise history on Feb. 19. Since taking over the helm, the Cavs have a 5-5 record (.500, tied for sixth-best in East), which include consecutive season series sweeps over the Denver Nuggets and San Antonio Spurs. Under Bickerstaff, the Cavs have recorded three wins against above .500 teams (Miami, Philadelphia and Denver) and are averaging 111.4 points and 26.4 assists (eighth-best in NBA). The Wine & Gold also have the fifth-highest field goal percentage in the NBA since the All-Star break (.480).

“I can’t tell you how excited I am for this opportunity to lead the Cavaliers and our promising and enthusiastic group of players that has been assembled here in Cleveland,” said Bickerstaff. “I want to thank Dan Gilbert and Koby Altman for having the trust and faith in my ability to coach this team, but also allowing me the freedom and endless resources to assist in creating a sustainable culture of winning and professional growth. Our players have done a phenomenal job of maintaining a high level of professionalism and growing maturity, of which I have been very appreciative. I also take great pride and consider it an honor and privilege to live and coach in this community with my family, in front of this fan base and for this franchise. It has truly been a blessing and I look forward to the journey ahead.”

Before coming to Cleveland, Bickerstaff was the head coach of the Memphis Grizzlies for the 2018-19 season after serving as the interim head coach for the final 63 games of the 2017-18 Grizzlies campaign. Under Bickerstaff last season, Memphis recorded the third-best scoring defense in the NBA, holding opponents to 106.1 points per game. The Grizzlies also held an NBA-high 10 opponents under 90 points last season and went undefeated in those games. Memphis limited 17 opponents to under 40 percent shooting last season, which was tied with Utah for the second-most in the NBA.

Prior to his stint with Memphis, Bickerstaff spent five seasons (2011-16) with the Houston Rockets, where he was elevated to interim head coach early in the 2015-16 season and guided the Rockets to a 37-34 finish to close the season with a postseason berth. Bickerstaff’s additional experience includes four seasons (2007-11) with the Minnesota Timberwolves as an assistant coach and three seasons (2004-07) with the Charlotte Bobcats under his father and current Cavaliers Senior Basketball Advisor, Bernie Bickerstaff. The youngest assistant coach in the NBA at age 25 when he began with the Bobcats in 2004-05, Bickerstaff followed in the footsteps of his father, who was the youngest assistant coach when he joined the NBA at 29 years old in 1973.

Bickerstaff served as director of operations for the University of Minnesota’s men’s basketball program before entering the NBA, overseeing all administrative areas of the program and assisting the coaching staff with recruiting, scouting and player development. He also played collegiately for two seasons (1999-2001) with the Golden Gophers after spending his first two years at Oregon State University, where he was the youngest Division I player as a 17-year-old freshman.