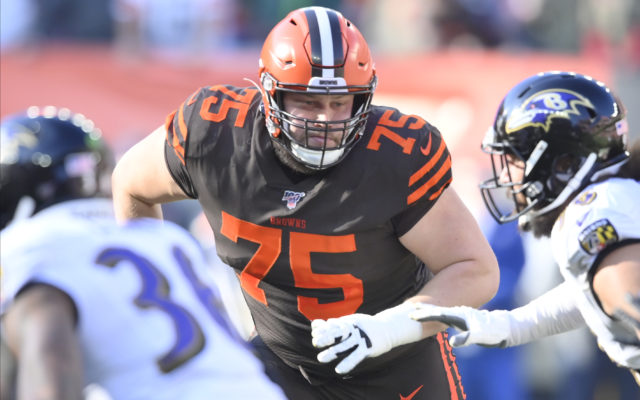 Berea, Ohio – Joel Bitonio wants to finish what he started.

Bitonio, the Pro Bowl left guard, signed a three-year extension Wednesday that runs through the 2025 season. The 2014 second-round pick just keeps getting better, and there’s nowhere else he or the Browns want to see him continue to thrive as a foundational piece of the team’s offense.

“I’ve been here for eight years now and seen a lot of ups and downs. To be part of that and for the team to have faith in me and allow me to be here for my entire career, it really means a lot. It’s special,” Bitonio said. “You see guys switch teams a lot and go from team to team, great players in this league. I saw Joe Thomas end his career here. It’s something when you get into Year 8 and Year 9, it gets in the back of your mind where it’d be really special to be in Cleveland your whole career and try to win a championship with these guys.

“I just want to thank the Haslams, Andrew Berry and Coach Stefanski for having faith in me and providing me with this opportunity.”

Bitonio, 30, has made 104 regular season starts, the second-most by any Browns player since the team’s return in 1999. He hasn’t missed a single snap since the start of the 2017 season, a stretch that’s seen him clear the way for record-setting runs by Nick Chubb and protect QB Baker Mayfield, who set the rookie TD record in 2018 and was one of the least-sacked quarterbacks in 2020.

“After last season, we decided that one of our major football priorities would be to make Joel Bitonio a Brown for the rest of his career,” said Berry, Cleveland’s Executive VP of Football Operations and General Manager. “Joel is one of our most decorated players and is the ideal personification of our ‘Tough, Smart, Accountable’ mantra. We value Joel’s high-level performance, leadership, consistency and durability.

“We are all excited about this extension and hopeful that at the end of his career we will all be looking forward to celebrating Joel’s gold jacket fitting in Canton.”

“Coach Stefanski and Coach Callahan dial up the runs and the play-action off that. It fits what I do well,” Bitonio said. “I feel like I’m in the prime of my career and hopefully can keep that going for a few more years.”

While the Browns organization weathered a stretch of instability during the first part of his career, Bitonio remained the constant. Since Bitonio joined the Browns, the team ranks fifth in the NFL with an average of 4.52 yards per rush. Those rushing totals have increased over the past two seasons, as the Browns currently lead the NFL in rushing yards (1,442), rushing average (5.28), rushing touchdowns (16) and rushes of 10-plus yards (46). Since 1999, only the 2004 Kansas City Chiefs have recorded more rushing touchdowns (18) in the first nine weeks of a season than the Browns this season (16).

“Joel Bitonio is everything you’d ever want in a football player,” Browns coach Kevin Stefanski said. “We always know exactly what we are going to get from Joel every rep, every practice, every game. His consistent effort, exceptional play, and team-first mentality make him a great teammate and truly a perfect example for every player that will ever wear brown and orange for the Cleveland Browns. Handing Joel a game ball in the locker room last year when we clinched a spot in playoffs will be a career highlight for me, Joel deserved that moment because of all the hard work and effort he puts into this organization. I’m so grateful for the opportunity to coach Joel. Congrats to him and his family, this contract is so well-deserved.”

Bitonio’s extension comes one day after the Browns rewarded RG Wyatt Teller with an extension of his own. With Jedrick Wills Jr. and Jack Conklin entrenched at the tackle positions and veteran JC Tretter manning the middle, the future of Cleveland’s offensive line looks just as rock-solid as it currently is in the present.

“I’ve got a lot of good friends on the O-line, and it’s guys who work hard and love the game of football and are passionate about the Cleveland Browns,” Bitonio said. “We want to run the ball, we want to protect Baker and take our shots down field. There’s sometimes a lack of good linemen in the league, so to get five, six, seven good ones on a team, it’s really nice to have that depth and hopefully we can keep the guys together for as many years as possible.”