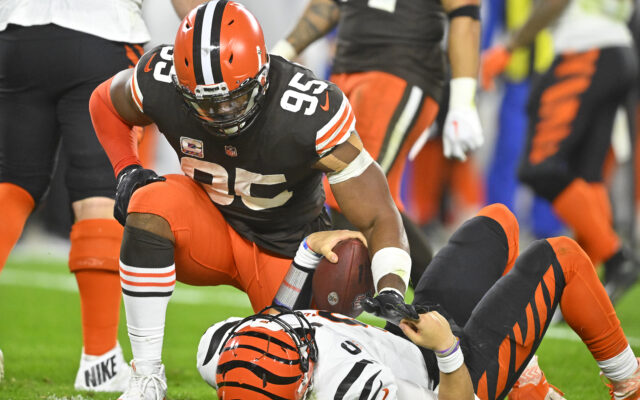 “On a night where the Browns came in with their season kind of hanging by a thread against a team that came in piping hot. The Cincinnati Bengals, with a strong arm quarterback that’s been difficult to defend the last two games. The Browns did that, and they just beat the Bengals tonight.” Those were the words from  play by play man Jim Donavan as the Browns beat the Bengals on Monday Night Football 32-13.

Last night, the Cleveland defense put on a haunted house for Joe Burrow with five sacks and an interception. Cincinnati was scoreless in the first half and didn’t get on the board until a touchdown at the beginning of the fourth quarter. Myles Garret t had 1.5 Sacks and tipped a pass that lead to an interception early in the game. Sione Takitaki lead the team with 6 solo tackles and added a sack of his own.

Offensively the Browns took a minute to get going, but never trailed. After going up 11-0 just before half , Cleveland used the second half to kill clock while setting up big plays. Plenty of names with impressive numbers. Nick Chubb: 23 carries for 101 yds and 2 tds, Jacoby Brissett: 17/22 passing for 278 yds with a rushing and passing td, Amari Cooer: 5 catches for 131 yds and a touchdown, and Kareem Hunt: 11 carries for 42 yds.

The Browns head into their bye week at 3-5. Next up, the Dolphins on the road, November 13.