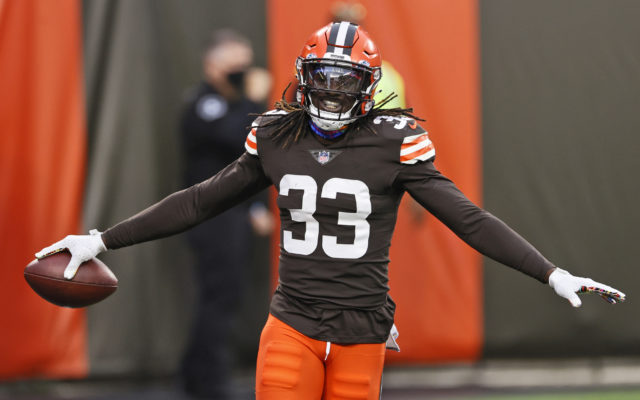 Cleveland Browns defensive back Ronnie Harrison celebrates after a 47-yard interception return for a touchdown during the second half of an NFL football game against the Indianapolis Colts, Sunday, Oct. 11, 2020, in Cleveland. (AP Photo/Ron Schwane)

For the first time since Bill Belichick was the head coach in 1994, the Cleveland Browns are 4-1 through the teams first 5 games after defeating the Colts 32-23 at First Energy Stadium.

The Browns built a 27-10 third quarter lead and held off the Colts for their 4th straight win.

To round out the scoring, Myles Garrett forced a safety and Cody Parkey connected on 3 field goals and 3 extra points in the victory.

Mayfield finished the game 21-37-247 yards with 2 td’s and 2interceptions. He also took a big hit late in the game to the ribs and will have x-rays, but said he’ll be ready to go for the big game in Pittsburgh next week against the first place and undefeated (4-0) Steelers.

Kareem Hunt led the ground attack with 72 yards on 20 carries.

Jarvis Landry was the team’s leading receiver with 4 receptions for 88 yards, while OBJ grabbed 5 passes for 58 yards.

Myles Garrett was a disruptive force all game long, so much so that Colts QB Phillip Rivers should have nightmares about him. Garrett forced Rivers into an intentional grounding penalty in the end zone in the 4th quarter for a safety, had 4 total tackles, 1 sack, 1 tackle for loss and 4 quarterback pressures.

Next Sunday’s game in the “Steel City” is currently set for a 1pm kick off here on 1480 WHBC.