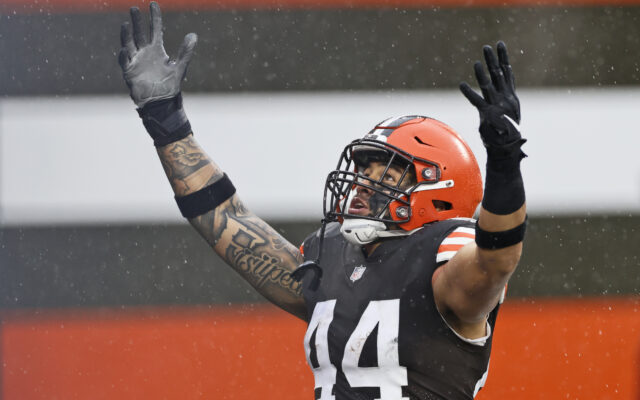 Cleveland Browns linebacker Sione Takitaki celebrates after running for a 50-yard interception return touchdown during the first half of an NFL football game against the Philadelphia Eagles, Sunday, Nov. 22, 2020, in Cleveland. (AP Photo/Ron Schwane)

The Cleveland Browns used a bend, but don’t break and opportunistic defense, and a patient running game to pick up their 7th win of the season 22-17 over the Eagles at First Energy stadium.

Sione Takitaki’s second quarter 50 yard interception return for a touchdown gave the Browns a 7-0 lead that they took into halftime. Both teams struggled offensively in the first half battling the rain and cold weather.

After a Baker Mayfield fumble in the third quarter, the Eagles tied the game at 7-7 on a Carson Wentz 19 yard touchdown pass to Richard Rodgers.

But the Browns would regain the lead on a Cody Parkey 46 yard field goal and a safety, when Oliver Vernon sacked Wentz in the end zone for a 12-7 lead.

After Philadelphia cut the lead to 12-10, the Browns running game finally exploded thanks to a Nick Chubb 54 yard run and then a 5 yard touchdown run from Kareem Hunt  as he hurdled defenders for a 19-10 lead.

Parkey connected on a second field goal for a 22-10 Browns advantage and the Eagles scored a late touchdown to make the final 22-17.

Playing without Myles Garrett who is out with the coronavirus, the defense sacked Wentz 5 times, led by Vernon with 3, Adrian Clayborn with 1 1/2 and Larry Ogunjobi with a 1/2 sack. The defense also created 3 turnovers.

Nick Chubb was the games leading rusher with 114 yards on 20 carries.

Mayfield finished the game 12-22-204 yards with 0 touchdowns and 0 interceptions and that 1 fumble.

The Browns leading receivers were Khadarel Hodge with 3 catches for 73 yards and “Hollywood” Higgins, who grabbed 3 passes for 65 yards.

With the victory, the Browns improved to (7-3) on the year, and with the Ravens losing to the Titans Sunday, Cleveland is now all alone in second place in the AFC North, 3 games behind the undefeated Steelers, who are (10-0).

The Browns travel to Jacksonville next Sunday to take on the (1-9) Jaguars. Kick off on 1480 WHBC is 1pm.