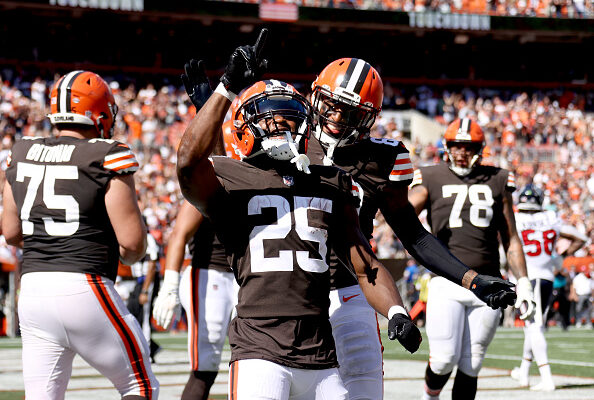 CLEVELAND, OHIO - SEPTEMBER 19: Running back Demetric Felton #25 of the Cleveland Browns celebrates after a touchdown catch in the game against the Houston Texans at FirstEnergy Stadium on September 19, 2021 in Cleveland, Ohio. (Photo by Gregory Shamus/Getty Images)

Despite bruising his shoulder in the game, Browns quarterback Baker Mayfield threw for one score and ran for another in leading Cleveland to its first win of the season, 31-21 over Houston.

Mayfield completed 19 of 21 passes for 213 yards and td throw to rookie Demetric Felton to even the Browns record at (1-1) in this young 2021 season.

Andy Janovich and Nick Chubb added touchdown runs for the Browns who broke open a 14-14 tie at halftime with 10 third quarter points.

Chubb finished the game with 95 yards rushing on 11 carries to lead the ground attack which racked up 156 yards total.

Next up for Kevin Stefanski’s squad, a Sunday encounter with the Chicago Bears at 1pm on the shores of Lake Erie.

Injury Notes: Besides Mayfield’s left shoulder that he said popped out, and they popped it back in so he could play….wide receiver Jarvis Landry injured his knee on the second play of the game and it’s feared he has some type of MCL injury. Landry will have imaging done on Monday.