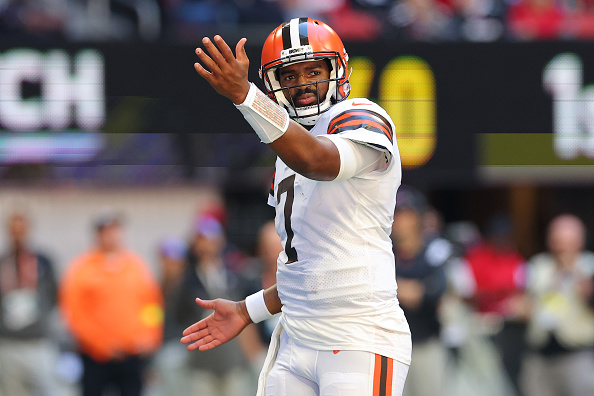 ATLANTA, GEORGIA - OCTOBER 02: Jacoby Brissett #7 of the Cleveland Browns reacts during the second quarter against the Atlanta Falcons at Mercedes-Benz Stadium on October 02, 2022 in Atlanta, Georgia. (Photo by Kevin C. Cox/Getty Images)
For the third time in the first four games the Browns defense gave up double digit points in the fourth quarter and it cost them a win in Atlanta Sunday 23–20.
Minus starters Myles Garrett, Jadeveon Clowney, Anthony Walker and Taven Bryan due to injuries, Cleveland’s defense gave up 13 points in the final quarter to see their record fall to (2-2) on the year.
After giving up the lead to Atlanta at 23–20 with 2:28 left in the game, Cleveland‘s offense had a chance to win, or at least tie the game, but Jacoby Brissett‘s pass was intercepted at the Atlanta 26 yard line with 1:03 left and the Falcons ran out the clock.
Brissett finished the game completing 21 of 35 passes for 234 yards, 0 touchdowns and the 1 interception. Brissett also added a rushing touchdown.
Nick Chubb led the Browns offense with 118 yards rushing on 19 carries and 1 score.
Rookie place kicker Cade York went to for two and field goal attempts to round out the Browns scoring.
Despite the loss, Cleveland remains tied for first place in the AFC North with Cincinnati and Baltimore who are also (2-2).
Next up for Kevin Stefanski’s squad, a home game Sunday, September 9th against the Chargers.
More about:
Atlanta Falcons
Cleveland Browns