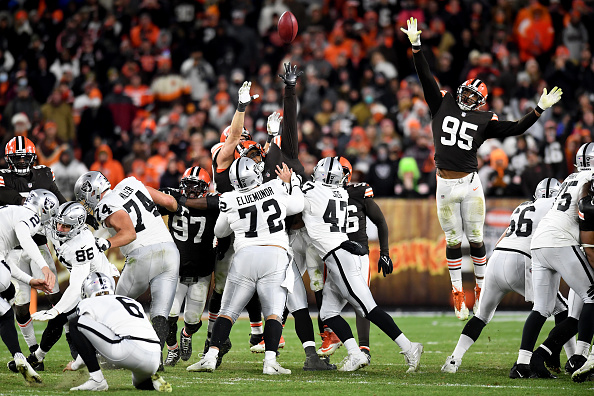 CLEVELAND, OHIO - DECEMBER 20: The Cleveland Browns attempt to defend as a field goal is kicked in the fourth quarter of the game against the Las Vegas Raiders at FirstEnergy Stadium on December 20, 2021 in Cleveland, Ohio. (Photo by Nick Cammett/Getty Images)

Down a total of 18 players because of Covid, including 8 starters and head coach Kevin Stefanski, the Browns battled to the very end and held a 14-13 lead with :03 seconds left, but Raiders kicker Daniel Carlson‘s 48 yard field goal as time expired lifted Las Vegas to a 16-14 win over the Browns at First Energy stadium last night.

With the loss, Cleveland’s playoff hopes take a big hit as their record falls to (7-7) on the year and puts them in last place in the AFC North, but only 1 game behind first place Cincinnati and Baltimore who are (8-6). Pittsburgh is in third place at (7-6-1).

Next up for the Browns, a road game Christmas Day against Aaron Rodgers and the Green Bay Packers.

Some NFL Pro Bowl news to pass along, as 5 Browns players have been named to the AFC Pro Bowl team they are: