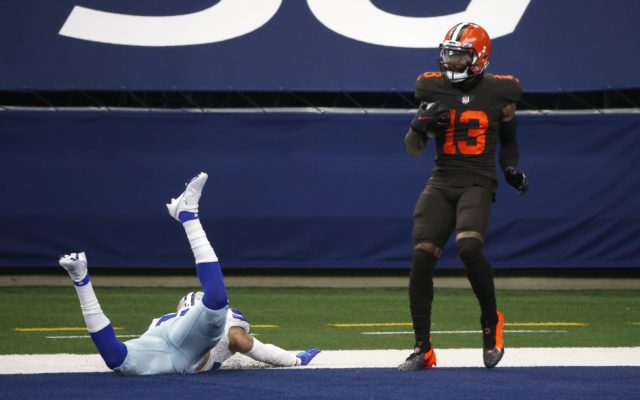 The Cleveland Browns won their third straight game beating the Cowboys in a shootout in “Big D”, in a game that didn’t feature much defense at all, 49-38.

The Browns racked up 508 total yards, 307 of those on the ground. (The most Dallas has ever given up in a game in team history)

Baker Mayfield threw for 165 yards and 2 scores with no interceptions or fumbles.

Kareem Hunt rushed for 71 yards and 2 td’s filling in for the injured Nick Chubb who left the game in the first half with a knee injury. No official word from the Browns on the severity of the knee injury, but the club did announce that  Chubb will have an MRI tomorrow.

Tight end Austin Hooper, who Cleveland signed as a free agent this off-season, grabbed his first touchdown pass as a Brown.

While the defense did give up 38 points and 566 total yards in the win, they were able to create 3 Dallas turnovers which they turned into 14 points.

Myles Garrett recorded 2 more sacks and another forced fumble, while Denzel Ward had an interception at the end of the game to seal the victory.

Cleveland will play host to the Indianapolis Colts next Sunday at 4:25PM right here on News-Talk 1480 WHBC.