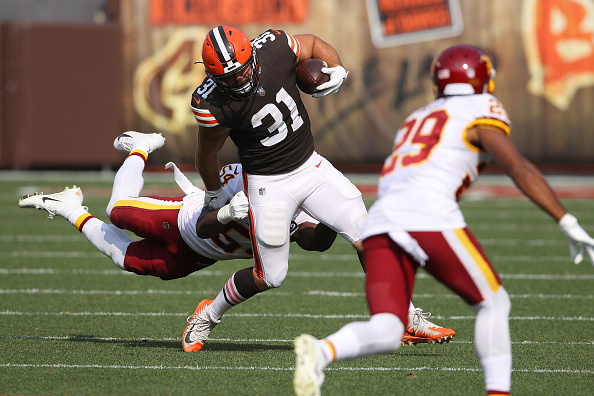 CLEVELAND, OHIO - SEPTEMBER 27: Andy Janovich #31 of the Cleveland Browns tries to escape the tackle of Kevin Pierre-Louis #54 of the Washington Football Team at FirstEnergy Stadium on September 27, 2020 in Cleveland, Ohio. Cleveland won the game 34-20. (Photo by Gregory Shamus/Getty Images)

The Cleveland Browns have placed FB Andy Janovich on the reserve/COVID-19 list.

Janovich did play in Sunday’s win over Houston.

The facility was re-opened early Tuesday after contact tracing showed no close contacts were identified.

This reserve list category was created for a player who either tests positive for COVID-19 or who has been quarantined after having been in close contact with an infected person or persons. Per agreed upon NFL-NFLPA policy, clubs are not permitted to comment on player’s medical status other than referring to roster status. Clubs may not disclose whether player is in quarantine or is positive for COVID-19.