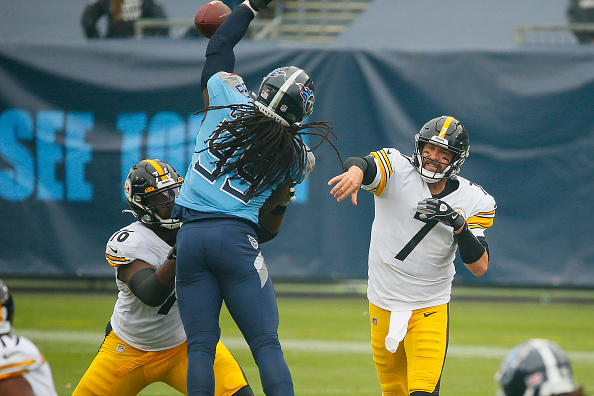 NASHVILLE, TENNESSEE - OCTOBER 25: Jadeveon Clowney #99 of the Tennessee Titans tries to block a pass by quarterback Ben Roethlisberger #7 of the Pittsburgh Steelers during the first half at Nissan Stadium on October 25, 2020 in Nashville, Tennessee. (Photo by Frederick Breedon/Getty Images)

The Cleveland Browns and free agent defensive end Jadeveon Clowney have agreed on a one year deal for the 2021 season.

Clowney almost signed with the Browns last year, but instead, decided to ink a one year deal in Tennessee for $13 million dollars.

With the Titans, he played in only 8 games because of a knee injury and did not record a sack the entire season.

Clowney, a 3-time Pro Bowler, is 28 and is a former number one overall pick from 2014 and has registered 32 career sacks in his 7 seasons in the NFL.

He joins fellow number one overall picks Myles Garrett(2017) and Baker Mayfield (2018) on the Browns roster.

Clowney’s deal is reportedly worth $8 million dollars with incentives that could push it to $10 million.

Here is the teams official release:

Former No. 1 overall pick gives the Browns another option off the edge

The Browns added more experience, depth and talent at the defensive end position with the signing of Jadeveon Clowney.

Clowney, a three-time Pro Bowl selection, comes to Cleveland after spending the 2020 season with the Tennessee Titans. The eight-year veteran joins Takkarist McKinley as the second major addition to the Browns’ group of pass rushers since the start of the new league year.

“We’re excited to add Jadeveon to our defensive line,” Browns coach Kevin Stefanski said. “He’s a disruptive force that will help us against the run and the pass. We’ve been able to make some nice additions to our defense throughout free agency and we are looking forward to getting to work, so we can improve our team.”

Clowney, the No. 1 overall pick in the 2014 NFL Draft by the Houston Texans, has racked up 32 sacks over seven seasons, though two of those years were significantly shortened by injuries. Clowney made three consecutive Pro Bowls from 2016-18, a stretch in which he averaged more than eight sacks per season and delivered a combined 59 hits on the quarterback. Clowney also earned second-team All-Pro recognition in 2016, his first of four consecutive seasons in which he started in double-digit games.

“Jadeveon’s had a very productive career since 2014. We love his relentless style of play,” Browns EVP of Football Operations and GM Andrew Berry said. “He’s one of the more disruptive players in the game and we think he’s going to add an element of ruggedness along our defensive line and will pair nicely with many of the guys we have on the roster already. The other thing we love about Jadeveon is his versatility, his ability to play all across the front and impact the game regardless of his alignment.”

Clowney spent his first five seasons with the Texans before joining the Seahawks via trade in 2019. He registered his first pick-six and posted the second-best defensive grade of his career (87.3), according to Pro Football Focus’ rankings, over 13 games.

This past season in Tennessee, Clowney appeared and started in eight games before his season was ended prematurely by a knee injury. Though he didn’t collect a sack, Clowney brought consistent pressure — 69.6 pass rush grade from Pro Football Focus — knocked down four passes and posted six hits on the quarterback.

“Jadeveon’s play-to-play impact on the game, whether it’s the run game as a rusher, lined up as a three-technique or lined up as an end, is something we really value,” Berry said. “We think he’ll really be beneficial for us in our defensive system.”

Clowney, a Rock Hill, S.C., native, was one of the highest-ranked recruits to ever play at the University of South Carolina. The two-time All-American and two-time first-team All-SEC selection is one of four DEs to be selected with the No. 1 pick since 2000.

Clowney joins a Browns defensive ends group, led by All-Pro Myles Garrett, that will have a different look to it in 2021. McKinley, who collected 19.5 sacks over the past four seasons with the Falcons, joined the team at the start of the new league year. The Browns released veteran Adrian Clayborn last month and veteran Olivier Vernon, who suffered an Achilles tear in Week 17, is a free agent.

Cleveland’s defensive ends accounted for 24.5 of the team’s 38 sacks in 2020. Garrett, McKinley, Clowney and the rest of the unit will look to build on that total in 2021.

“All of those guys are very talented players. They all have their own specific styles,” Berry said. “We certainly love the physical gifts but the other thing we love is how hard all three of those guys play. You really have to be relentless to be an effective defensive lineman in the NFL and that’s a trait we think all three of those individuals have.