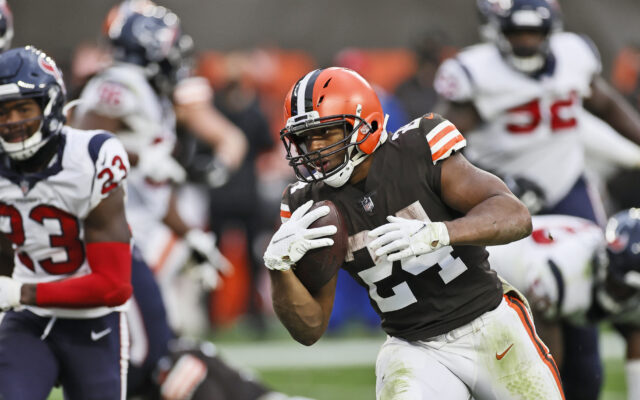 Cleveland Browns running back Nick Chubb (24) rushes for a 9-yard touchdown during the second half of an NFL football game against the Houston Texans, Sunday, Nov. 15, 2020, in Cleveland. (AP Photo/Ron Schwane)

After missing 4 games with a knee injury, running back Nick Chubb returned to the starting line up and led the Browns to a 10-7 win over the Texans.

In a game where the weather was once again a major factor, head coach Kevin Stefanski relied on Chubb and fellow running back Kareem Hunt to carry the load and it was a recipe for success.

Chubb ran for a game high 129 yards and the Browns only touchdown on 19 carries. Hunt also carried the pigskin 19 times for 104 yards. As a team the Browns totaled 231 yards on the ground, and every run and every yard was needed in this hard fought win.

Baker Mayfield managed the game well completing 12 of 20 passes for 132 yards, but more more importantly, number #6 did not turn the ball over.

Hollywood Higgins was Cleveland’s top receiver, grabbing 3 passes for 48 yards, including a key 3rd down catch for 21 yards late in the game.

Myles Garrett had another huge game on the defensive side of the ball stopping Houston quarterback Deshaun Watson on a key 4th and goal play from the 2 yard line early in the game. Garrett also picked up a sack, 2 tackles for loss and 6 total tackles.

Besides Chubb’s 9 yard touchdown run early in the 4th quarter, the Browns only other points came off the foot of Cody Parkey who nailed a 41 yard field goal in the 1st quarter and his only extra point attempt.