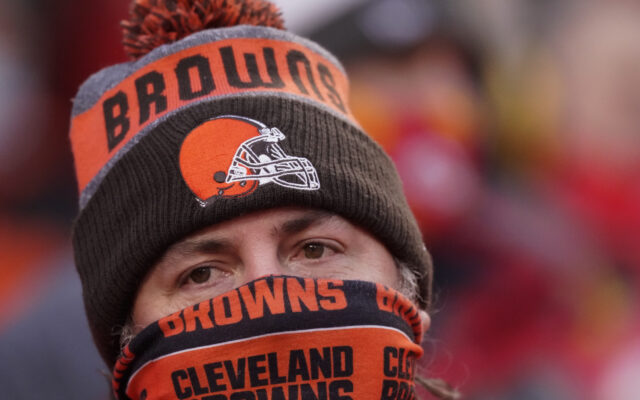 A Cleveland Browns fan watches from the stands during the second half of an NFL divisional round football game between the Kansas City Chiefs and the Cleveland Browns, Sunday, Jan. 17, 2021, in Kansas City. (AP Photo/Charlie Riedel)

The Browns pushed hard and almost pulled off the comeback, but is was a back up quarterback from Michigan who did them in.  When Patrick Mahomes left game with a concussion, Chad Henne was called to duty.  He got a crucial first down to ice the game and Kansas City wins.  Browns fans enjoyed a run in the playoffs deeper than they had seen in decades.  A controversial no call on a helmet to helmet hit as the Browns fumbled the ball through the end zone will forever be a bone of contention for the dog pound.  The Browns were about to score and instead turned the ball over to the Chiefs.

From the Associated Press:

The AFC title game is returning to a familiar place in Kansas City. The question all week will be whether Patrick Mahomes will be able to play quarterback for the Chiefs.

Backup Chad Henne converted a fourth-and-1 pass to Tyreek Hill to seal the game after Mahomes left with a concussion and the Chiefs beat the Cleveland Browns 22-17 Sunday.

“We’re one team. We’re one heartbeat. We play for one another and that’s really always the thought,” defensive back Tyrann Mathieu said. “Any time any of our teammates go down we always feel the need to kind of step it up a notch and take care of what we need to take care of.”

Coach Andy Reid’s gutsy call helped make sure the Chiefs would become the first team to host the AFC championship game for the third straight year. No AFC team has ever done that and the only one to do it in the NFC was Reid’s Philadelphia Eagles in the 2002-04 seasons.

Kansas City (15-2) will host the Buffalo Bills (15-3) next Sunday with a return trip to the Super Bowl on the line for the Chiefs.

“Great team. Big-time quarterback. Playmakers all over the place,” Mathieu said of the Bills. “A really, really good defense, so we’re going to have our hands full next week.”

Mahomes’ status won’t be known until much later in the week. He threw a TD pass and ran for another score in the first half before getting hurt on a quarterback option midway through the third quarter.

New Orleans (13-4) is hosting Tampa Bay (12-5) later Sunday for the right to visit Green Bay in the NFC title game next week.

Kansas City raced out to a 19-3 halftime lead behind Mahomes and held on for the win thanks to Henne and the defense.

Mathieu intercepted Baker Mayfield in the third quarter and the Chiefs made a third-down stop late in the fourth quarter on Cleveland’s last drive.

Henne and the Chiefs then ran out the clock. Henne converted a third-down pass to Darrel Williams and then scrambled 13 yards on third-and-14 to set up the biggest play of the game with a little over a minute to play.

Instead of playing it safe and punting, Reid called a pass play and Henne completed a 5-yarder to Hill to ice the game.

The other key play came late in the first half when Cleveland receiver Rashard Higgins tried to stretch the ball over the goal line for a touchdown. Kansas City’s Daniel Sorensen delivered a hit, popping the ball loose and into the end zone for a touchback.