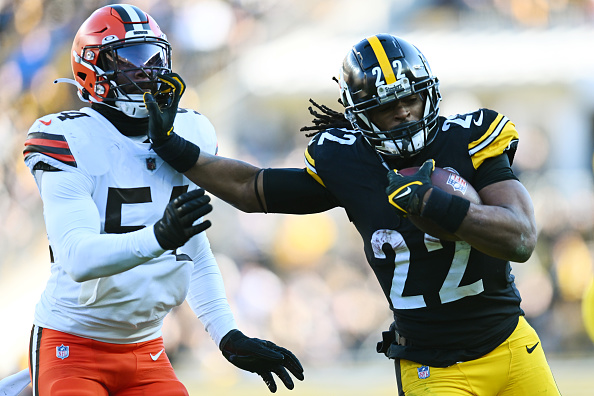 PITTSBURGH, PENNSYLVANIA - JANUARY 08: Najee Harris #22 of the Pittsburgh Steelers runs with the ball during the third quarter of the game against the Cleveland Browns at Acrisure Stadium on January 08, 2023 in Pittsburgh, Pennsylvania. (Photo by Joe Sargent/Getty Images)
The Cleveland Browns saw their season come to an end Sunday in Pittsburgh losing to the Steelers 28-14.
After jumping out to a 7-0 second quarter lead on a touchdown pass from Deshaun Watson to David Njoku, the Browns allowed the Steelers to score the next 20 points and then Mike Tomlin’s squad coasted to the two touchdown win.
In the loss Browns quarterback Deshaun Watson threw for 230 yards with two touchdowns and two interceptions.
In Watsons six starts after returning from an 11 game suspension,  the Browns went (3-3).
With the loss, overall Cleveland ends the 2022 campaign with a record of (7-10) and in last place in the AFC North.
The Steelers finished the year (9-8), but failed to make the playoffs, finishing third in the AFC North behind division champ Cincinnati and the wildcard Ravens.
More about:
Cleveland Browns
Deshaun Watson
Pittsburgh Steelers