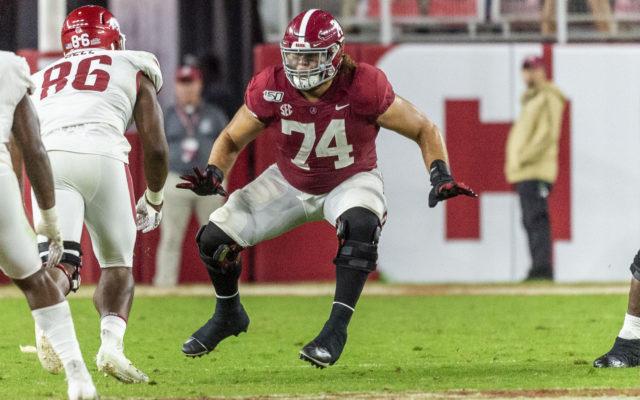 Alabama offensive lineman Jedrick Wills Jr. (74) looks for a block against Arkansas during the second half of an NCAA college football game, Saturday, Oct. 26, 2019, in Tuscaloosa, Ala. (AP Photo/Vasha Hunt)

Started 29 games at right tackle for the Crimson Tide, including 28 straight to end his career…Allowed only one sack as a junior and only 3.5 quarterback hurries…Helped anchor the Tide’s offensive line that ranked third nationally, allowing  just .92 sacks per game, surrendering only 12 sacks in 406 pass attempts during the 2019 season…Part of Alabama’s offense that ranked No. 2 nationally in scoring (47.2 ppg), third in passing (342.2 ypg) and sixth in total offense (510.8 ypg)…Helped block for the ground game, which accounted for 5.5 yards per rush (1,665 yards and 18 touchdowns)…Earned second team All-America accolades from the AFCA, Associated Press, The Sporting News and Walter Camp in 2019…Selected by Pro Football Focus as a third team All-American at tackle in the same season and was named to the All-SEC First Team by the Associated Press and league coaches…Earned CoSIDA Academic All-District honors for his efforts in the classroom as a junior and sophomore…Native of Lexington, Ky.