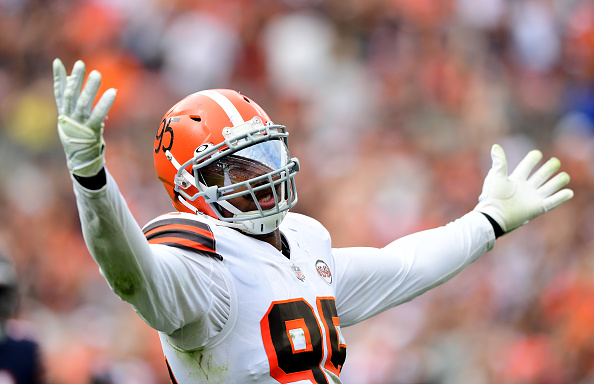 CLEVELAND, OHIO - SEPTEMBER 26: Myles Garrett #95 of the Cleveland Browns celebrates a defensive play during the second half in the game against the Chicago Bears at FirstEnergy Stadium on September 26, 2021 in Cleveland, Ohio. (Photo by Emilee Chinn/Getty Images)

The Browns destroyed the Bears at First Energy Stadium 26-6.

Myles Garrett, with a team record, and career high 4 1/2 sacks, led a defense which generated 9 total sacks, kept Chicago out of the end zone, and limited the Bears to 47 yards of total offense.

Baker Mayfield threw for 246 yards and 1 touchdown to tight end Austin Hooper, while Kareem Hunt scored the teams other touchdown on a 29 yard run, as he totaled 155 yards from scrimmage.

Kicker Chase McLaughlin had a huge day for Cleveland connecting on 4 field goals, including a 57 yarder and 2 extra points.

Coming off ACL surgery and rehab, Odell Beckham Jr. played in his first game since week 7 of last season and and caught 5 passes for 77 yards.

Former Ohio State quarterback and Bears first round pick, Justin Fields, making his first career NFL start, threw for only 68 yards and rushed for just 12 more yards, while being sacked those 9 times.

Cleveland out gained Chicago 418 yards to 47.

The Browns improved to (2-1) on the season, and up next for Kevin Stefanski’s squad, the Vikings in Minnesota next Sunday at 1pm.