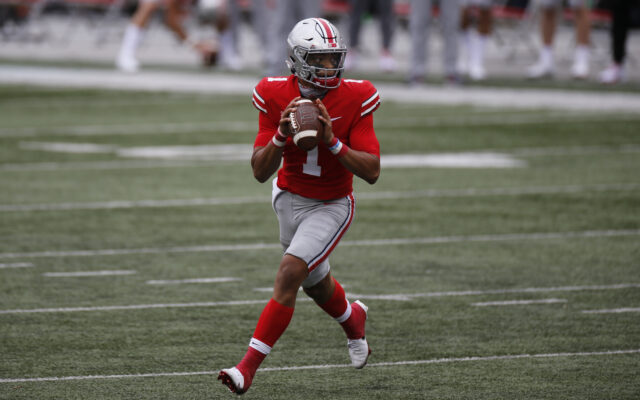 It wasn’t perfect, but yet still impressive in a few ways as the Ohio State Buckeyes, playing their first game of the 2020 pandemic season and their first game since a playoff loss to Clemson, beat Nebraska 52–17 in Columbus on Saturday afternoon.

Quarterback Justin Fields showed why he is a Heisman Trophy candidate and a Top 5 NFL prospect, as he completed 20 of 21 passes for 276 yards and 2 touchdowns without an interception. He also rushed 15 times for 54yards and one score.

Fields had a couple of favorite targets, hooking up with wide receiver Garrett Wilson 7 times for 129 yards and a touchdown, while also completing 6 passes to Chris Olave for 104 yards. Olave had to leave the game with a possible concussion, his status will be updated at a later time.

Running back Master Teague rushed for 41 yards and 2 touchdowns in the win, and defensive back Sevyn Banks returned a fumble 55 yards for a touchdown on defense.

Next week Ohio State will play at Penn State, kick off is set for 7:30pm right here on NEWS-TALK 1480 WHBC.