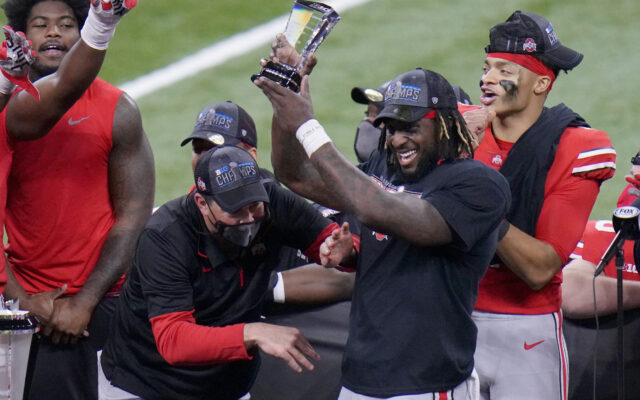 Thanks to a record setting performance by running back Trey Sermon, Ohio State rallied from a 10-6 halftime deficit to beat Northwestern 22-10 for their fourth consecutive Big Ten Championship.

Sermon scored twice in the second half and set OSU’s single game rushing record with 331 yards on 29 carries, breaking the old mark held by Eddie George.

Blake Haubeil connected on 3 of 4 field goals for Ohio State.

That helped offset a poor performance by quarterback Justin Fields who completed just 12 of 27 passes for 114 yards with 2 interceptions and no touchdowns. Fields finished the game with his right thumb/wrist taped and said he thinks it might be sprained, so that could have been part of the reason he struggled.

The Ohio State defense shut out the Wildcats in the second half, forcing 2 interceptions (Justin Hilliard and Josh Proctor), 1 fumble and a missed field goal.

With 399 yards rushing as a team, the Buckeyes were able to rack up 513 total yards to Northwestern’s 329, and won the turnover battle as well, 3-2 which was huge.

Ohio State did have 21 players out this game either with an injury or Covid-19 related issues, and they included starters, punter Drew Chrisman, safety Marcus Hooker, linebacker Baron Browning and wide receiver Chris Olave.

Next up for the Buckeyes, they wait to see if a 12 point win over Northwestern in the Big Ten title game, and a (6-0) record is enough to get them into the Collège Football Playoff. The selection committee show will make that decision sometime after 12pm tomorrow, December 19th.