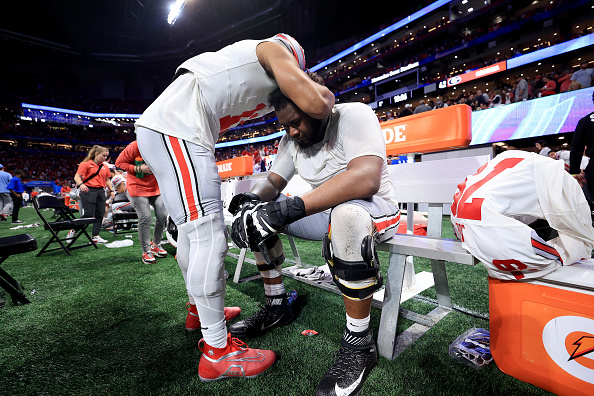 ATLANTA, GEORGIA - DECEMBER 31: Ohio State Buckeyes players react after the loss to the Georgia Bulldogs in the Chick-fil-A Peach Bowl at Mercedes-Benz Stadium on December 31, 2022 in Atlanta, Georgia. (Photo by Carmen Mandato/Getty Images)

Ohio State blew leads of 14 points in both the first half and the second half in losing to Georgia 42-41 in the College Football Playoff semi-finals at the Peach Bowl in Atlanta.

The Bulldogs outscored the Buckeyes 18-3 in the fourth quarter, which included Stetson Bennett’s 10 yard touchdown pass with :54 left to give Georgia the 1 point lead.

C.J. Stroud then drove the Buckeyes to the Bulldogs 32 yard line to set up the potential game winning field goal, but Ohio State kicker Noah Ruggles missed badly on a 50 yard attempt and O.S.U.’s season was over.

Stroud was outstanding in his final game for the “Scarlet and Gray”, throwing for 348 yards and 4 touchdowns without an interception.

Before leaving the game in the third quarter with a possible concussion, Marvin Harrison Jr. was also fantastic catching 5 pass for 106 yards and 2 scores.

But just like in the Michigan game, in the end it was the Buckeyes defense who couldn’t hold the lead giving up 45 points and 530 yards to the Wolverines and 42 points and 533 yards to the Bulldogs to end the season with consecutive losses and an (11-2) record.

Georgia improves to (14-0) on the year and they will play TCU for the National Championship on January 9, 2023 thanks to the Horned Frogs upsetting Michigan in the first College Football Playoff semi-final today 51-45.