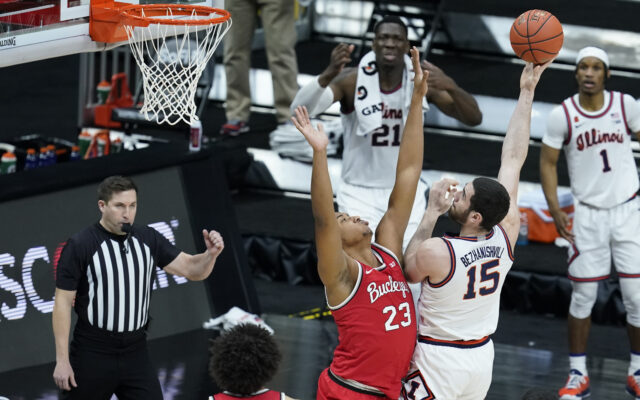 Selection Sunday was both good and bad for the Buckeyes.

Ohio State fell behind Illinois in the Big Ten Championship game by as many as 17 points, rallied back to force overtime, be eventually lost to the Fighting Illini 91-88 in the extra session.

Duane Washington Jr. was sensational for O.S.U. scoring a career high 32 in defeat. All Big Ten performer E.J. Liddell had one of his worst games of the season for Ohio State shooting just 3 of 16 from the field for 12 points.

For the second straight game the Buckeyes were without starting forward Kyle Young, as the former Jackson Polar Bear missed the title game due to a concussion.

With the loss, Chris Holtmann’s squad finishes the regular season at (21-9).

Even with the overtime loss to Illinois, and losing 5 of their last 8 games, the Buckeyes were given a #2 seed in the South Region of the NCAA tournament and will play 15th seeded Oral Roberts on Friday in Indianapolis.

Tip off between the Buckeyes and Golden Eagles happens at 3pm Friday at Mackey Arena on the campus of Purdue University and you’ll hear it right here on News-Talk 1480 WHBC.

The four #1 seeds in this year’s March Madness bracket went to Gonzaga, Baylor, and Big Ten teams Michigan and Illinois.

Two other Ohio teams, Cleveland State and Ohio University made the tournament.

Cleveland State is a #15 seed after winning the Horizon League Championship. The Vikings will play #2 seed Houston in the Midwest Region.

Ohio University is a #13 seed after winning the Mid American Conference Championship. The Bobcats will battle #4 seed Virginia in the West Region.

Due to the coronavirus pandemic, all games in the NCAA Tournament will be played in Indiana this year at six different sites, with the Final Four and Championship games to be held April 3-5 at Lucas Oil Stadium.