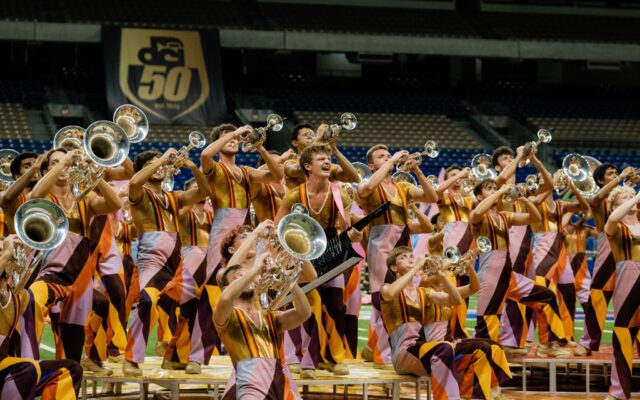 On July 23 Drum Corps International’s Southwest Championship in San Antio, Texas concluded the 2022 Texas tour for Canton’s Bluecoats Drum and Bugle Corps.  The corps had shows in Denton on Thursday night and in Houston on Friday.

The show in San Antonio was the first regional competition of the year featuring 19 of DCI’s World Class units.

In front of 15,000 spectators in the Alamo Dome the 19 time DCI World Champion Blue Devils, from Concord, California,

continued their undefeated season with a winning score of 92.175.  Placing 2nd was the Boston Crusaders, their highest placement ever in a major DCI show, with a score of 90.7.  Placing 3rd, with a score of 90.425, was Carolina Crown from Ft. Mill, South Carolina.  The Bluecoats were just shy of the 90 mark scoring 89.9 with strong 2nd place scores in Visual Proficiency and Visual Analysis.  The Vanguard, from Santa Clara, California, rounded out the top 5 with a score of 88.75.

The Bluecoats now move to Little Rock, Arkansas for a show on July 27 then to shows in Murfreesboro, Tenessee on July 29 and Atlanta, Georgia on July 30.

Tickets are now on sale for the August 8 “DCI Tour of Champions – Akron” to be held at Infocision Stadium.  The show will feature eight DCI World Class corps and the 400+ members of the Bluecoats 50th Anniversary alumni corps.  Tickets can be purchased online at the Bluecoats or DCI web sites.