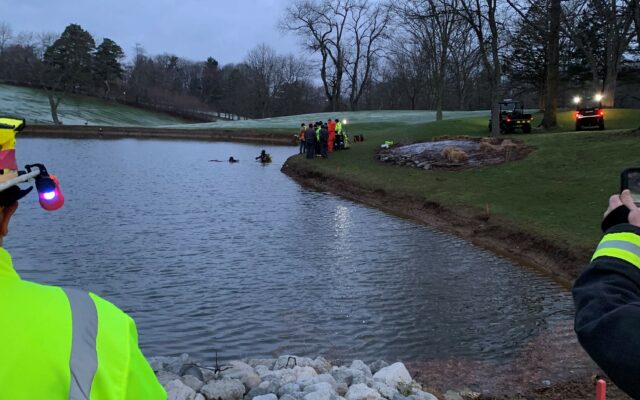 At 1:34 AM the North Canton Police responded to the area of Lorena St. SW  on a report of a woman knocking on doors asking for help. Officers responded  to the area and spoke with the female who said that she was in a car that had crashed into a body of water. She was unclear on where or  how the crash happened.

She advised officers that she swam from the vehicle and ran to nearby houses to get help.   Officers checked the local park ponds and contacted neighboring  departments to check nearby bodies of water. Officers were able to ping  the females cell phone, narrowing the search to the area of Arrowhead Golf  Course where they found fresh tire tracks leading into a small pond.

According to police the car entered the golf course from a nearby road, drove around the course and into the pond. There were no skid marks leading into the pond and not much damage done to the course, outside of the ruts left in the ground during removal.   They also say no charges have been filed yet.

At 3:37 AM the North Canton Fire Department was called to assist in the search. At approximately 4:00 AM a vehicle was located fully submerged in  the pond. The South Summit County Dive Team was contacted to search  the pond for other potential occupants. A deputy from the Stark County  Sheriff’s Office also responded to the scene and utilized a drone to check  the surrounding area. They found no one else.

Dive team members from Coventry, New Franklin, Green, and Lakemore  searched the pond using sonar equipment. The entire pond was searched,  including the vehicle, finding no other people.

Members from the Canton Regional Crash Team were summoned to the  scene to assist with the crash investigation. This incident currently remains under investigation.