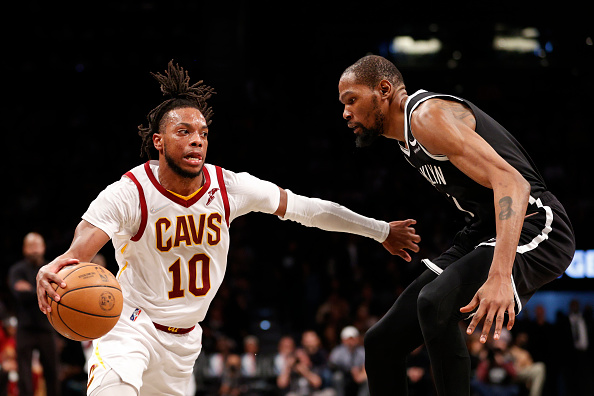 NEW YORK, NEW YORK - APRIL 12: Darius Garland #10 of the Cleveland Cavaliers dribbles against Kevin Durant #7 of the Brooklyn Nets during the second half of the Eastern Conference 2022 Play-In Tournament at Barclays Center on April 12, 2022 in the Brooklyn borough of New York City. The Nets won 115-108. NOTE TO USER: User expressly acknowledges and agrees that, by downloading and or using this photograph, User is consenting to the terms and conditions of the Getty Images License Agreement. (Photo by Sarah Stier/Getty Images)

All-Star point guard Darius Garland and the Cavaliers have agree to a rookie-max contract extension worth $193 million dollars over five years.

It is the largest contract ever given to a player in franchise history.

Reportedly the contract could be worth up to $231 million dollars if Garland reaches the escalator clause in the deal by making one of the three All NBA teams for the 2023 season.

Garland, who is 22, was the the 5th overall pick by the Cavs in the 2019 NBA Draft and had a break out year last season averaging a career best 21.7 points per game while also handing out 8.6 assists per contest.

He and last year’s 3rd overall pick, Evan Mobley are considered the core pieces for a Cavs team expecting to make the playoffs in 2022-23.