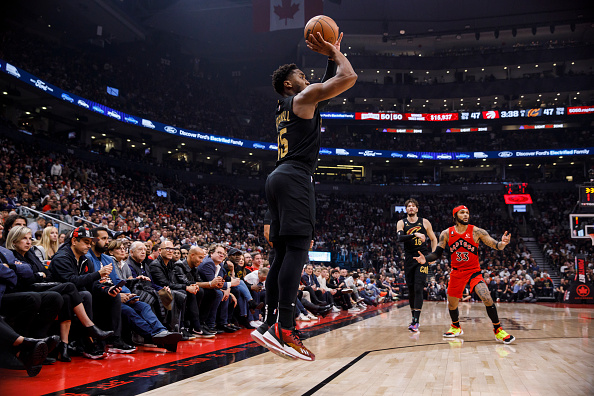 TORONTO, ON - OCTOBER 19: Donovan Mitchell #45 of the Cleveland Cavaliers puts up a shot during the first half against the Toronto Raptors at Scotiabank Arena on October 19, 2022 in Toronto, Canada. NOTE TO USER: User expressly acknowledges and agrees that, by downloading and or using this photograph, User is consenting to the terms and conditions of the Getty Images License Agreement. (Photo by Cole Burston/Getty Images)

The Cavaliers opened their season with a 108-105 road loss at Toronto Wednesday night.

The team also lost starting point guard Darius Garland to an eye injury in the 2nd quarter.  Garland finished with 4 points, 3 assists and 5 turnovers in just 13 minutes before he was hit in the eye by the Raptors Gary Trent Jr. in the second quarter and did not return.

The Cavaliers led throughout the second half, but Toronto closed the game on a 16-8 run to secure the victory.

Donovan Mitchell, making his Cleveland debut after being acquired in that blockbuster trade in the off season, led the Cavs with 31 points and 9 assists. Jarrett Allen added 13 points, 10 rebounds and 2 blocks for the “Wine and Gold”.

Pascal Siakam led the Raptors with 23 points and 11 boards.

Next up for J.B. Bickerstaff’s squad, a date with the Bulls in Chicago this Saturday night.