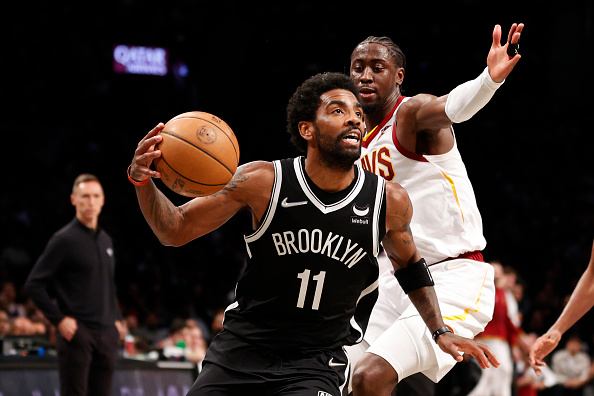 NEW YORK, NEW YORK - APRIL 12: Kyrie Irving #11 of the Brooklyn Nets dribbles as Caris LeVert #3 of the Cleveland Cavaliers defends during the first half of the Eastern Conference 2022 Play-In Tournament at Barclays Center on April 12, 2022 in the Brooklyn borough of New York City. NOTE TO USER: User expressly acknowledges and agrees that, by downloading and or using this photograph, User is consenting to the terms and conditions of the Getty Images License Agreement. (Photo by Sarah Stier/Getty Images)

Kyrie Irving hit his first 12 shots and finished with a game high 34 points and Kevin Durant added 25 in leading the Nets to a 115-108 win over the Cavaliers in Brooklyn last night in the 7-8  “Play-In” game.

The Nets jumped out to a 40–20 lead at the end of the first quarter and kept the Cavs at bay the rest of the way, as Cleveland got as close as 6 in the fourth quarter, but could not get over the hump.

Darius Garland led the Cavaliers with 34 points, Evan Mobley added 19 points and 7 rebounds and Kevin Love came off the bench for a double/double with 14 points and 13 rebounds.

Even with the loss the Cavaliers will still have a chance of qualifying for the NBA playoffs as the 8th seed as the “Wine and Gold” will host another ”Play-In” game on Friday night against the winner of the Wednesday night game between the Hawks and Hornets in Atlanta.

With the victory, Brooklyn advances to the NBA playoffs as the 7th seed and will now play in a 7 game series with the 2nd seeded Boston Celtics.