Cavs Love Will Be Honored For Courage At 2020 ESPY’s 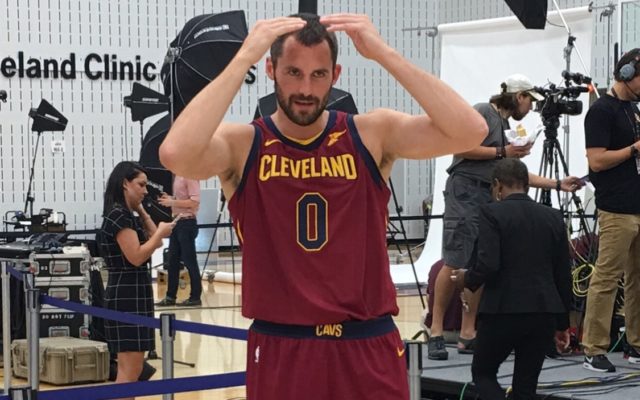 In 2018, Cleveland Cavaliers star Kevin Love penned a deeply personal piece in The Players’ Tribune detailing his struggles with mental illness. The essay, which described his surreal experience of having a panic attack during an NBA game, had rippling effects far beyond the world of basketball. Athletes and fans all over began to open up, sharing details of their own mental health challenges and circulating resources on how to get help. Suddenly, the floodgates were open; mental health had reached the forefront of the national sports conversation. Love spoke with ESPN’s Jackie MacMullan at the time for a follow up interview where he elaborated on his journey.

In the years since, Love has created the Kevin Love Fund and continues to shed light on the difficulties of dealing with mental health, appearing in PSAs, speaking at conferences, and meeting with children to show them they are not alone in their struggles. During the COVID-19 crisis, he’s become even more vocal, speaking out widely on the mental health challenges of this isolating, stressful moment and sharing tips on how best to cope. In recognition of his unwavering commitment to helping others, Love will be honored with the Arthur Ashe Courage Award during The 2020 ESPYS on Sunday, June 21st on ESPN.

“It is an absolute honor to receive this award and I am incredibly humbled by it. In telling my story, if I can help just one child that is suffering to make sense of what they are experiencing, I know my efforts have been worth it,” said Love. “And I hope one day we are able to erase the stigma around mental illness, starting with public conversations around mental health and encouraging people to seek help when they need it, followed by research, action, and change.”

Added Senior Vice President and Editor-At-Large ESPN Content, Rob King: “Kevin has courageously challenged stifling norms about mental wellness and masculinity, especially in the world of sports. His bold leadership in removing the stigma around mental health issues is helping many people, making this a well-deserved honor.”

The Arthur Ashe Award for Courage at the annual ESPYS has become one of the most prominent, prestigious, and talked-about honors in sports. Having recognized global icons like Muhammad Ali and Nelson Mandela, little-known heroes like Zaevion Dobson and Emmanuel Ofosu Yeboah, sports legends like Pat Summitt and Billie Jean King, and many more, the award pays tribute to those who find ways through sports to make a difference far beyond the field of play and impact the world in indelible ways.