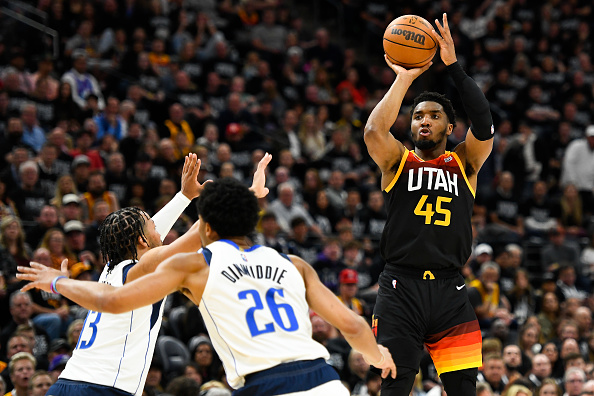 SALT LAKE CITY, UTAH - APRIL 28: Donovan Mitchell #45 of the Utah Jazz shoots over Jalen Brunson #13 of the Dallas Mavericks during the second half of Game 6 of the Western Conference First Round Playoffs at Vivint Smart Home Arena on April 28, 2022 in Salt Lake City, Utah. NOTE TO USER: User expressly acknowledges and agrees that, by downloading and/or using this Photograph, user is consenting to the terms and conditions of the Getty Images License Agreement. (Photo by Alex Goodlett/Getty Images)

Various media reports including @wojespn, @ShamsCharania and @ChrisFedor have the Cavaliers trading for Utah Jazz shooting guard Donovan Mitchell, who turns 26 next week.

Cleveland reportedly will give up Collin Sexton, Lauri Markkanen, rookie first round pick Ochai Agbaji, 3 future unprotected first round picks in 2025, 2027 and 2029 and pick swaps in 2026 and 2028 in exchange for the 3-time all-star who is a career 24 points per game scorer.

The Cavs were an Eastern Conference “Play-In” team this past season going (44-38) and losing both “Play-In” games to Brooklyn and Atlanta.