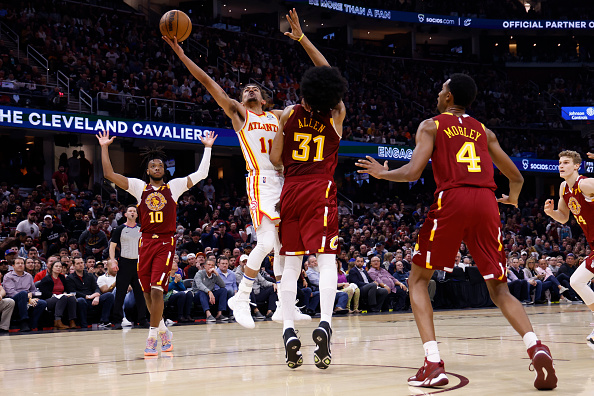 CLEVELAND, OHIO - APRIL 15: Trae Young #11 of the Atlanta Hawks shoots on Jarrett Allen #31 of the Cleveland Cavaliers in the first half at Rocket Mortgage Fieldhouse on April 15, 2022 in Cleveland, Ohio. NOTE TO USER: User expressly acknowledges and agrees that, by downloading and or using this photograph, User is consenting to the terms and conditions of the Getty Images License Agreement. (Photo by Rick Osentoski/Getty Images)

Turnovers, poor shot selection, missed shots and questionable coaching decisions led to the Cavaliers blowing a 14 point lead at home in a do or die “Play-In” game against the Hawks losing 107-101 and therefor failing to qualify for the NBA Playoffs.

Trae Young lit up Cleveland with 32 second half points to finish with 38 for the game and lifted Atlanta into the 8th seed in the Eastern Conference and a date with the number #1 seeded Miami Heat in a 7 game, first round series.

With back-to-back “Play-In” losses to the Nets and Hawks, Cleveland, which finished with 44 regular season wins to double their total from a year ago, is now headed back to the NBA’s Draft Lottery and will have the worst odds of all the 14 teams as the Cavs will be slotted 14th going into the Draft Lottery which takes place in Chicago on May 17, 2022.