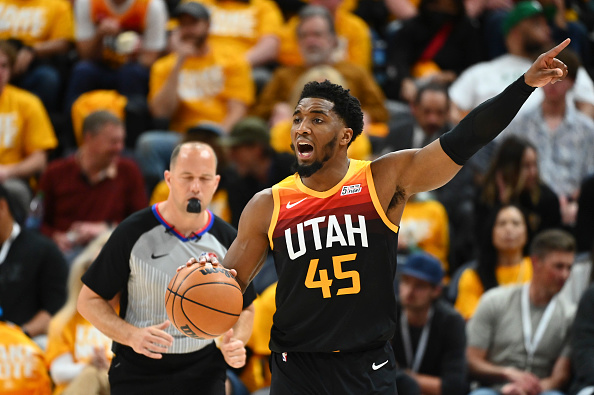 SALT LAKE CITY, UTAH - APRIL 21: Donovan Mitchell #45 of the Utah Jazz in action during the second half of Game Three of the Western Conference First Round Playoffs against the Dallas Mavericks at Vivint Smart Home Arena on April 21, 2022 in Salt Lake City, Utah. NOTE TO USER: User expressly acknowledges and agrees that, by downloading and/or using this Photograph, user is consenting to the terms and conditions of the Getty Images License Agreement. (Photo by Alex Goodlett/Getty Images)

“The acquisition of Donovan Mitchell presented us with an incredible opportunity to bring one of the NBA’s most dynamic young All-Stars to Cleveland,” said Altman. “Already a special and proven talent at just 25-years-old, Donovan brings a competitive mentality that organically fits with the core group of this team. We are excited to see the impact that someone of Donovan’s caliber can bring to the Cavaliers with his ability to score the basketball, but also make plays for his teammates. We welcome Donovan and his entire family to Northeast Ohio. I also want to thank Collin and Lauri for their contributions to our team as well as Ochai, who has a very promising future in this league. The Cavaliers have a tremendous amount of respect and admiration for all three players and wish them and their families all the best in Utah.”

Mitchell (6-3, 215), who was a 2022 NBA All-Star, played in 67 games (all starts) for the Jazz last season while averaging 25.9 points (9th-best in NBA), 4.2 rebounds, a career-high 5.3 assists, and a career-best 1.5 steals in 33.8 minutes. He also made 3.6 three-pointers per contest, which was the fourth-highest in the league, and scored at least 20 points on 52 occasions and 30-plus points in 23 outings. Mitchell earned Western Conference Player of the Month for games played in December 2021, the first Jazz player to earn the accolade since Deron Williams in November 2010, and was the Western Conference Player of the Week for Nov. 29-Dec. 5, 2021. Additionally, he averaged 12.4 points as the ball-handler in pick-and-roll plays (2nd-best in NBA) and had the highest effective field goal percentage (.538) of the top five players in that category. Mitchell’s 232 three-pointers were tied for seventh in the NBA and was the fifth straight season he had knocked down over 170 threes. On March 16 versus Chicago, he connected on a career-best nine three-pointers and scored 37 points, including 25 points in the third quarter, tying the Jazz franchise record for a single period.

A three-time NBA All-Star (2020-22), Mitchell owns career averages of 23.9 points, 4.2 rebounds, 4.5 assists and 1.3 steals in 33.7 minutes over 345 games (337 starts) in five NBA seasons, all with Utah. He leaves the Jazz ranking second in their team’s history in three-pointers made (958) and eighth in points scored (8,234). Mitchell is also just the sixth player in NBA history to total over 8,000 points, 1,500 assists and 1,400 rebounds through their first career 345 contests, joining LeBron James, Dwyane Wade, Michael Jordan, Pete Maravich and Oscar Robertson. The 6-3 guard has also reached the playoffs in all five of his NBA seasons, appearing in 39 total postseason games (all starts) with averages of 28.3 points, 4.9 rebounds, 4.7 assists and 1.18 steals in 37.0 minutes per contest. An NBA All-Rookie First Team selection (2018) and NBA Slam Dunk Contest champion (2018), Mitchell was originally selected by Denver as the No. 13 overall pick in the 2017 NBA Draft before being traded to the Jazz on draft night.