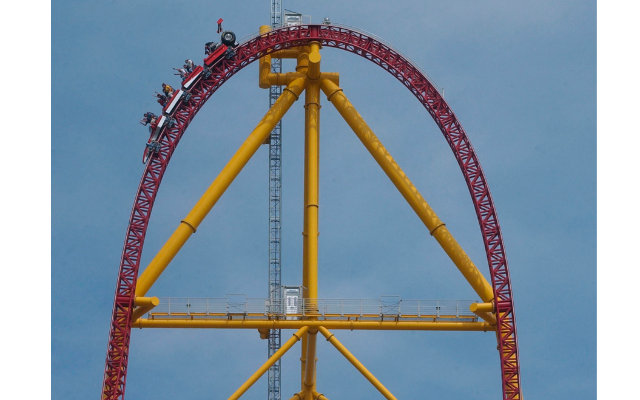 FILE - Riders on the Top Thrill Dragster speed along on May 1, 2003, at Cedar Point Amusement Park, in Sandusky, Ohio. The amusement park in Ohio is permanently closing the world’s second-tallest roller coaster. The decision announced Tuesday, Sept. 6, 2022, by Cedar Point comes a year after a small metal object flew off the 420-foot (128-meter) tall Top Thrill Dragster coaster and struck a woman in the head at the park in Sandusky. (AP Photo/Paul M. Walsh, File)

SANDUSKY, Ohio (News Talk 1480 WHBC) – The days following Labor Day often give us Cedar Point’s plans for next season, and they did not disappoint.

In a tweet, the Sandusky park says it will “retire” the “Top Thrill Dragster” roller coaster, though the huge ride has sat eerily silent all this season.

A Cedar Point spokesman says the ride will be “reimagined”.

They say more information is forthcoming.

“Top Thrill” ran for 19 years at the park, but was shut down last August when a woman on the ground was hit in the back of the head and seriously injured by a piece of metal from the ride.