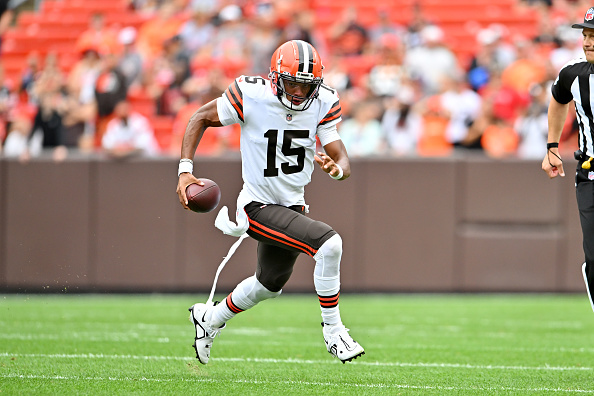 CLEVELAND, OHIO - AUGUST 21: Quarterback Joshua Dobbs #15 of the Cleveland Browns runs for a first down during the first quarter of a preseason game against the Philadelphia Eagles at FirstEnergy Stadium on August 21, 2022 in Cleveland, Ohio. (Photo by Jason Miller/Getty Images)

Starting QB Deshaun Watson, who has been suspended for the first 11 games of the regular season for violating the NFL’s personal conduct policy as he was accused by at least 24 women of sexual misconduct, could have played, but did not. That decision, and the decision to not play his back-up, Jacoby Brisstette, who in turn will be the Browns opening day starter at quarterback, was made by head coach Kevin Stefanski.

That gave third string QB Josh Dobbs a chance to start and he played well in the loss, throwing for 141 yards, while also rushing for 47 yards and a touchdown.

Another back up, running back John Kelly Jr. scored Cleveland’s other touchdown, while rookie kicker Cade York connected on 2 of 3 field goals and both extra points to round out the scoring. York’s lone miss came from 55 yards out, as he hit the right upright.

Cleveland is now (1-1) in the preseason and will play their third and final exhibition game Saturday night at home against the Bears at 7pm.