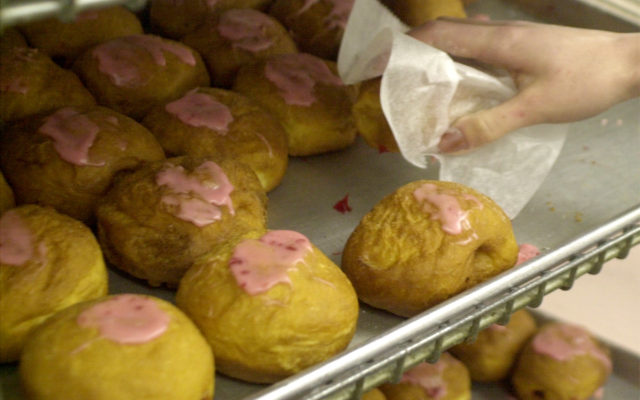 An employee at the New Deluxe Bakery and Delicatessen in Hamtramck, Mich., grabs a strawberry filled Paczki on Monday, Feb. 11, 2001. The bakery got a start on making and selling Paczki's for Fat Tuesday, which is also known as Paczki Day, when many throw their diet to the wind and purchase and comsume the rich pastries in mass amounts. The confection, which resembles a donut, comes filled with either custard or jelly. Fat Tuesday, the beginning of the Lenten season, is Tuesday. (AP Photo/Paul Warner)

This year, February 25th is Fat Tuesday/Shrove Tuesday! Most people know what ‘Fat Tuesday’ is…but what is ‘Shrove Tuesday?’ Same thing! This is the day in February or March immediately preceding Ash Wednesday. Mardi Gras is French for “Fat Tuesday,” reflecting the practice of the last night of eating rich, fatty foods before the ritual fasting of the Lenten season.

Related popular practices are associated with Shrovetide celebrations before the fasting and religious obligations associated with the penitential season of Lent. Shrove Tuesday, which is derived from the word shrive, meaning “to administer the sacrament of confession to; to absolve.”

And you are supposed to splurge by eating Paczki!  (pronounced Poonch-key)  Enjoy!