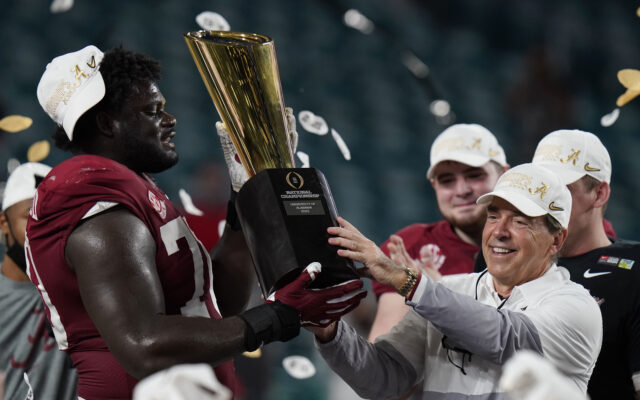 The first College Football Rankings came out and they may be the boldest  yet. Undefeated teams dropping, Power Five schools dominating, and still 5 weeks left to play. Each notable team has a reason for where they are. Breaking down each ranking may help heading into the weekend.

#1 Georgia (8-0)  – Kirby Smart’s squad has been riding high all season long. Started the year in the top five, knocked off #2 Clemson in week one, overcame injury to starting quarterback, three wins against ranked teams, and holding strong at #1. The problem is Georgia has a demon that only Joe Burrow and the LSU Tigers have conquered recently, beat Alabama to continue your season and ruin theirs.

#2 Alabama (7-1)  – The Crimson Tide is and will continue to be the pride and joy of the committee. Their loss to Texas A & M is clearly seen as a fluke, not a loss to an unranked opponent. Alabama’s history of winning and performing in the playoff will always get them an extra bump. This bump will annually help get them in the CFP or move them towards the top. A win against Georgia may move the Crimson Tide to #1, a loss may only move them to #4. Right now it’s hard to imagine Alabama not being in the College Football Playoff.

#3 Oregon (7-1)  – This one turned some heads. The Ducks find themselves at #7 in the AP Poll, but somehow in the CFP. The committee must see the win over Ohio State as a gigantic badge of honor and a loss to Stanford as something similar to Alabama’s fluke loss. Oregon is the black sheep and the bold pick of this playoff group. This means they shouldn’t get comfortable if Ohio State and Oklahoma  grab more impressive wins toward season’s end.

#5 Ohio State (7-1)  – The Buckeyes sitting just outside the playoffs was no surprise for anyone. They have the committee’s respect, but have more to prove. The poor showing in their only win against a ranked team was not helpful. Thankfully for Ohio State, wins against Michigan State, Michigan, and Iowa should land them in the playoff.

#6 Cincinnati (8-0) – Luke Fickell and the Bearcats are having the season everyone wanted to see. A perfect season, including a win against Notre Dame in South Bend. A true Cinderella season, worthy of a CFP spot. Unfortunately the Bearcats come in at #6 in the CFP rankings. Why is that? Cincinnati  can blame Notre Dame for the lack of respect. Despite no conference title, Notre Dame’s undefeated season bought them playoff tickets in 2019 and 2021. The Fighting Irish failed to put up a fight in either appearance, losing  30-3 in 2019 against Clemson and 31-14 against Alabama last year. Unfortunately, the committee may see Cincinnati as a possible dud similar to Notre Dame.

#8 Oklahoma (9-0)  – Oklahoma is a perfect example of the Committee having fan goggles on. A slew of unimpressive wins paired with Spencer Rattler drama has nobody liking the Sooners. This doesn’t mean Oklahoma is down and out. The Sooners have two games against ranked teams and a Freshman quarterback possibly bringing new life. It’s always interesting to see an undefeated team left out of the playoff, Oklahoma is a good example of why it can and should happen.