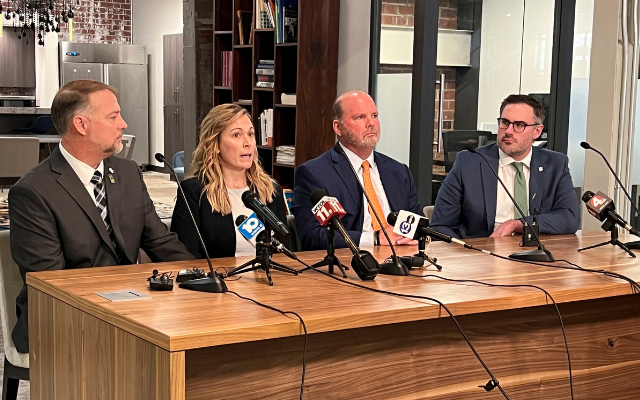 Shari Foltz, second left, speaks while her husband Cory Foltz, left, sit next to attorneys Rex Elliott, second right, and Sean Alto in a press conference where Elliott announced that the Foltz family will receive nearly $3 million from Bowling Green State University to settle its lawsuit Monday, Jan. 23 2023, in Bowling Green, Ohio. Foltz's son, Stone, died of alcohol poisoning in March 2021 after a fraternity initiation event where there was a tradition of new members finishing or attempting to finish a bottle of alcohol, according to a university investigation. (AP Photo/Patrick Orsagos)

BOWLING GREEN, Ohio (News Talk 1480 WHBC and ONN) – Bowling Green State University is paying the family of Stone Foltz $2.9 million, a settlement related to the wrongful death of the BG student in a fraternity hazing incident.

Parents Cory and Shari Foltz say it was never about the money, though it can go to support the foundation the family has created.

They want to work cooperatively with the university and the state to stop all hazing.

It’s the biggest payout ever by a public university in Ohio.

The settlement was announced yesterday.