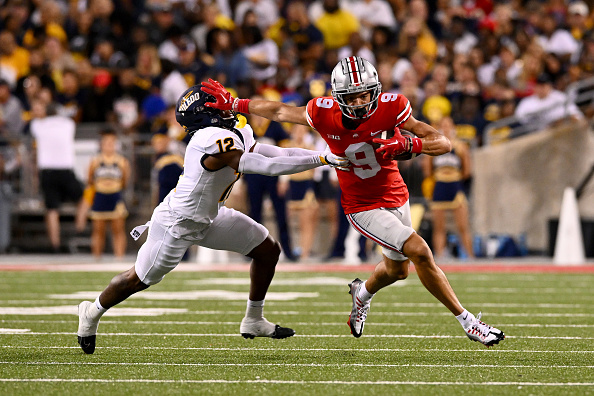 COLUMBUS, OHIO - SEPTEMBER 17: Jayden Ballard #9 of the Ohio State Buckeyes stiff arms Avery Smith #12 of the Toledo Rockets as he runs with the ball during the third quarter of a game at Ohio Stadium on September 17, 2022 in Columbus, Ohio. (Photo by Ben Jackson/Getty Images)
Former Massillon wide receiver Jayden Ballard was one of eight Buckeyes to score a touchdown in the team’s 77-21 win over Toledo Saturday night in Columbus.
Ballard caught a 72 yard touchdown pass from back up quarterback Kyle McCord in the fourth quarter to reach the end zone for the first time in his college career. 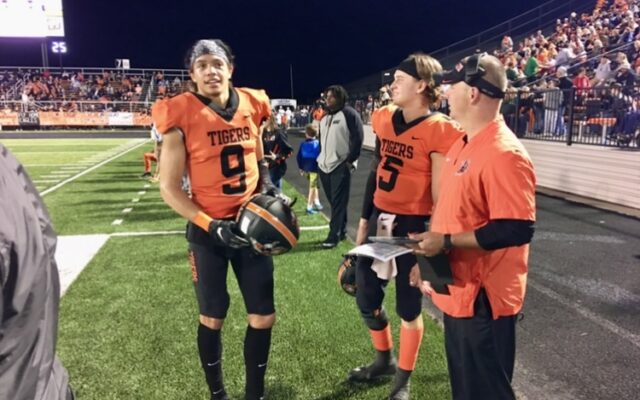 The former Tiger finished the game with 4 receptions for 113 yards and the score.
He was one and three Ohio State wide receivers to go over 100 yards joining Marvin Harrison Jr.(102 yards-2td) and Emeka Egbuka(116 yards-1td). Ballard also had 1 punt return for 14 yards.

Heisman Trophy candidate C.J. Stroud, who played the first 3 quarters, put up video game like numbers completing 22 of 27 passes for 367 yards and 5 touchdown passes with no interceptions to lead the #3 ranked Buckeyes to victory.

Ohio State is now (3-0) on the year and will play their first Big 10 contests next Saturday night in Columbus, when they welcome the Wisconsin Badgers to “The Shoe” for a 7:30pm kick off that can be heard on WHBC.
More about:
CJ Stroud
Jayden Ballard
Marvin Harrison Jr
Ohio State Buckeyes
Toledo
Wisconsin