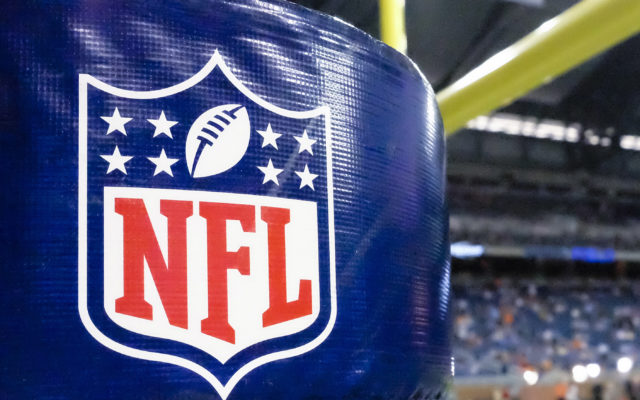 FILE - This Aug. 9, 2014 file photo shows an NFL logo on a goal post pad before a preseason NFL football game between the Detroit Lions and the Cleveland Browns at Ford Field in Detroit. The NFL Players Association has created a medical guide for players, a 107-page reference book written by scientific professionals with extensive material on concussion detection, treatment and the league's game-day protocol for head injuries. The union's inaugural "health playbook" was distributed electronically to NFLPA members this week. (AP Photo/Rick Osentoski, File)

MLB announced Friday that it is moving the 2021 All-Star Game out of Atlanta in response to a new Georgia law that has civil rights groups concerned about its potential to restrict voting access for people of color.

The 2021 MLB draft, a new addition to All-Star Game festivities this year, will also be relocated.

In a statement, MLB commissioner Rob Manfred said the league is “finalizing a new host city and the details about these events will be announced shortly.” A source told ESPN that the 2022 All-Star Game is still planned for Dodger Stadium in Los Angeles and that that site won’t be moved up to fill the void this summer.

The Atlanta Braves said they were “deeply disappointed” by the outcome.

According to NBC Sports’ Peter King,  the NFL is considering a “Midnight Madness”-style opening to training camps in late July. The league is attempting to have 28 teams open on the same date with some fanfare for each opening, similar to how college basketball programs host their first practice in October.If the NFL can pull off this type of event, the date is expected to be Tuesday, July 27 — which would be 47 days before the start of the first Sunday of the regular season. The league still would have some kinks to work out (i.e. the Week 1 “Monday Night Football” game since those teams will start a day later), but the NFL wants to make a dormant time on the league calendar more meaningful. Preseason games are no longer expected to be played on Thursday nights. The new three-week preseason will have games played on Fridays through Sundays beginning the weekend of Aug. 13-15.

IF THE SEASON WOULD END NOW, THE CAVS WOULD PICK AT NUMBER 5. According to web page tankathon.

CAVS IN SAN ANTONIO TO TAKE ON THE SPURS TONIGHT AT 7pm.

TODAY IN SPORTS and Music History