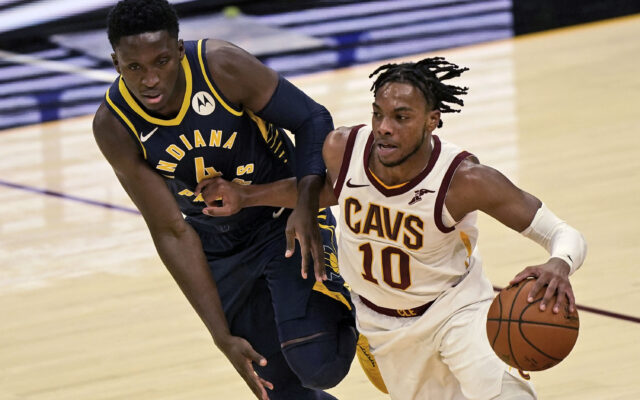 NBA ALL-STAR GUARD JOINED LEBRON JAMES AS THE ONLY PLAYERS IN CAVS HISTORY TO AVERAGE AT LEAST 20.0 POINTS AND 8.0 ASSISTS IN A SINGLE SEASON;

“Darius has proven to be a tremendous basketball player and someone who embodies everything a franchise would want in a young player,” said Altman. “We’ve quickly seen Darius grow into an NBA All-Star and an integral core piece in our pursuit of sustainable success. Both on and off the court, Darius has demonstrated a strong commitment to this organization and the community. We look forward to our future and what we can accomplish here in Cleveland.”

Garland, a first-time NBA All-Star this past season, appeared in 68 games (all starts) and registered career highs in points (21.7), rebounds (3.3), assists (8.6, sixth-best in NBA), steals (1.31), minutes (35.7), field goal percentage (.462) and free throw percentage (.892, seventh-best in NBA). He also had more double-doubles (29), 20-point games (42) and 30-point games (seven) this season than his first two NBA campaigns combined. The third-year guard joined LeBron James as the only players in franchise history to finish a season averaging at least 20.0 points and 8.0 assists and was just one of only five NBA players to do so this season (Trae Young, Dejounte Murray, Luka Dončić, James Harden). Garland helped lead the Cavaliers to a 44-38 record, their best mark since 2017-18, and finished third place in the NBA’s Most Improved Player of the Year voting.

The 6-1 guard was one of only two NBA players to average at least 20.0 points and 8.0 assists while shooting .450 or better from the field and .850 from the foul line (Trae Young). Garland also recorded 29 point-assist double-doubles and 19 games of at least 20 points and 10 assists, both were the fourth-most in the entire NBA. He earned NBA Eastern Conference Player of the Week honors for the week of Jan. 10-16 and had a stretch of five straight games with at least 10 assists in January (Jan. 15-24), becoming just the second Cavs player to accomplish that feat since 2003 (LeBron James). Additionally, Garland became the fourth-youngest player in Cavaliers history to notch a triple-double in a win at Utah on Jan. 12 (LeBron James, Brad Daugherty, Kyrie Irving) and just the third player in NBA history to have a game of at least 27 points, 18 assists and five rebounds before age 22 during Cleveland’s victory at Oklahoma City on Jan. 15 (Trae Young, Luka Dončić).

At 2022 NBA All-Star Weekend in Cleveland, Garland helped Team Cavs capture the championship at Taco Bell Skills Challenge and followed that up with 13 points in Team LeBron’s victory in the All-Star Game. After the break, Garland averaged 24.8 points and 10.0 assists over the final 21 games. During that span, he dished out a career-high 19 assists on March 4 at Philadelphia, which was tied for the most assists by any player in the NBA this season (Chris Paul, twice). Garland also recorded a career-high 41 points, to go along with 13 assists, five rebounds and two steals in a win at Indiana on March 8, becoming one of just six players in NBA history at age 22 or younger to tally at least 40 points, 10 assists, five rebounds and two steals in a single game (Michael Jordan, LeBron James, Isiah Thomas, Chris Webber, Luka Dončić).