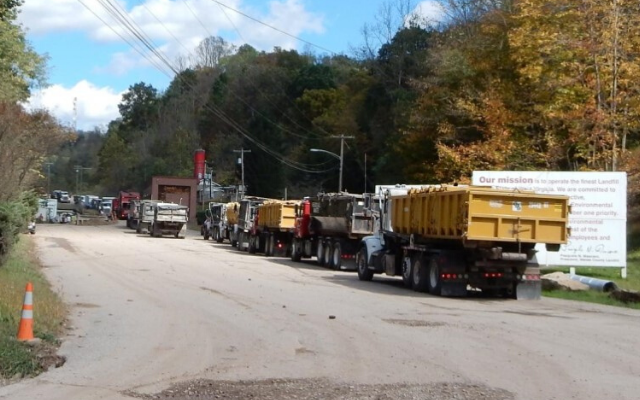 COLUMBUS, Ohio (News Talk 1480 WHBC and Ohio News Connection) – A federal loophole means millions of tons and billions of gallons of radioactive natural gas waste are being disposed of as if they were not radioactive.

According to the investigation by Rolling Stone, liquid brine from the average Marcellus well contains more than 9,000 picocuries per liter of radium.

A picocurie, abbreviated pCi, is equal to the radioactivity of one gram of radium. A nuclear site is not allowed to discharge wastewater above 60 pCi.

Melissa Troutman, research and policy analyst for the nonprofit group Earthworks said the problem is an exemption included in federal law for oil and gas waste decades ago.

“It is exempt from hazardous waste law, and has been since the 1980s,” Troutman explained. “So, for the past 40 years, this waste has been disposed of improperly, and has led to water and land contamination as well as public health risks.”

The industry argues that naturally occurring radioactivity doesn’t pose a real threat to humans or the environment. And gas drillers’ political allies have said increased regulations would stunt growth at a time when the industry is already troubled by low prices.

Troutman said the levels and types of radioactivity in the waste are far more dangerous than what people normally would encounter, particularly when it is concentrated in the processes of production and disposal. She adds there are people in Congress who see this as a serious problem.

“At the federal level, there are bills that have been introduced to close the hazardous waste loophole,” she said. “The unfortunate thing is, the political will is not there to do so.”

According to Earthworks, Marcellus and Utica drilling has produced nearly 400 billion barrels of liquid waste and almost 10 million tons of solid waste since 2011.

Troutman said while all oil and gas drilling produces some radioactive waste, the waste from the Marcellus is the most radioactive in the country.