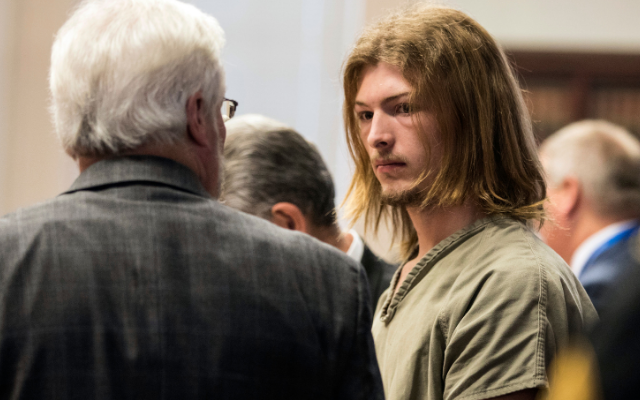 Edward "Jake" Wagner is arraigned at the Pike County Courthouse on Tuesday, Nov. 27, 2018 in Waverly, Ohio. The first of four family members charged with the 2016 shootings of seven adults and a teenager from the Rhoden family has pleaded not guilty to aggravated murder and other charges in the potential death penalty case. Wagner acknowledged the 23 counts against him but said little else. He is being held without bond. (Robert McGraw/The Chillicothe Gazette via AP, Pool)

WAVERLY, Ohio (News Talk 1480 WHBC) – Five years to the date of the Rhoden family killings in southern Ohio and with no resolution to the legal cases up to this point, 28-year-old Jake Wagner entered a plea agreement to eight counts of aggravated murder yesterday, sparing him the possibility of the death penalty.

The Columbus Dispatch says the plea hearing was not even on the Pike County court docket until moments before the hearing took place.

The county prosecutor says the younger Wagner agrees to cooperate in the cases against his parents and older brother.

Jake Wagner was at the center of the dispute between the families.

They were fighting for custody of his and Hanna Rhoden’s then-infant child.

Hanna was one of the eight killed.