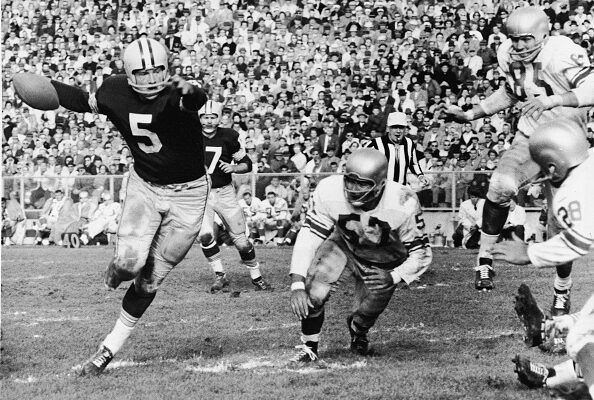 American professional football player Paul Hornung (#5), halfback for the Green Bay Packers, carries the ball through a hole in the defense during a game, 1960s. (Photo by Pictorial Parade/Getty Images)

Pro Football Hall of Famer Paul Hornung passed away today at the age of 84. Enshrined into the Hall of Fame in 1986, Hornung was a bonus draft pick in 1957 for the Green Bay Packers, where he spent his entire nine-year professional football career.

Said to have a “nose for the end zone,” Hornung scored 760 points in nine seasons on 62 touchdowns, 190 PATs and 66 field goals. As his record clearly shows, Paul did more than just score points. He gained 3,711 yards rushing and 1,480 yards on pass receptions.

The following is a statement from Hall of Fame President & CEO David Baker:

“The entire Pro Football Hall of Fame family mourns the passing of Paul Hornung. He was an outstanding player and an incredible man. Known as “The Golden Boy,” Paul was above all a leader to whom the Packers looked for the big plays in the big games – especially during the team’s dynasty years under Coach Vince Lombardi in the 1960s.Our thoughts and prayers are with Paul’s wife, Angela, and their entire family. We will forever keep his legacy alive to serve as inspiration for future generations. The Hall of Fame flag will be flown at half-staff in Paul’s memory.”