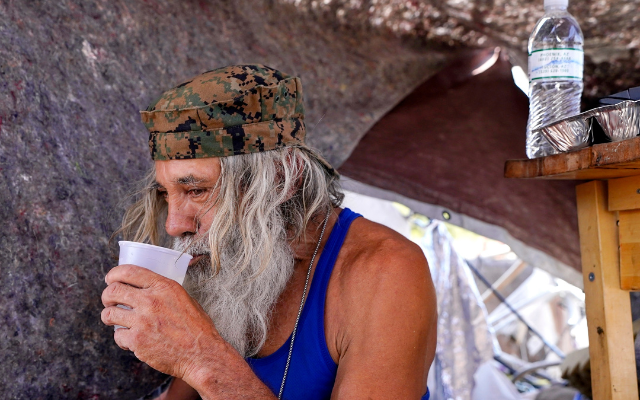 Roberto Delaney takes a drink of water as he tries to stay cool inside his tent at a homeless encampment, Tuesday, July 19, 2022, in Phoenix. Heat associated deaths in Arizona's largest county appear headed for a record this year with 17 such fatalities reported through the first week of July and another 126 under investigation as a growing number of homeless people live outside as temperatures remain well into the triple digits. (AP Photo/Ross D. Franklin)

AccuWeather Senior Meteorologist Bob Larson says there’s hot air just about everywhere, and when it drops from “hot” to “very warm” here on Thursday, then the heat returns for the weekend.

Bob with the proof that this isn’t unusual: we’re nowhere near breaking any temperature records.

And Bob says we’re not going to break any temperature records over the next five days, because it’s supposed to be occasionally hot this time of year.

Here’s the AccuWeather forecast for Canton:

Tonight: warm and humid with a thunderstorm this evening; it could be severe. Low 73.

Tomorrow: sunshine and patchy clouds; not quite as warm, but humid.. High 87.

Lots of sun and back to the hot stuff Friday and 90.