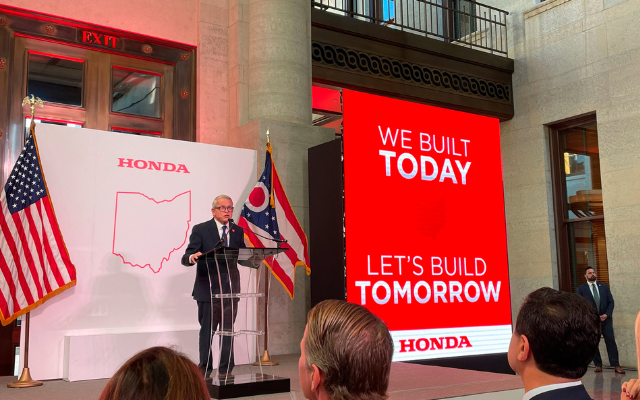 Republican Gov. Mike DeWine, state legislators Honda officials announce the automaker’s plans for a $3.5 billion joint-venture battery factory and investing over $700 million in electric vehicle manufacturing in rural southern Ohio during a news conference at the Ohio Statehouse in Columbus, Ohio, on Tuesday, Oct. 11, 2022. Honda says it will hire 2,200 people to staff the factory as it starts to turn the state into its North American electric vehicle hub. (AP Photo/Samantha Hendrickson)

COLUMBUS, Ohio (News Talk 1480 WHBC) – Big plans for Honda in Ohio during an announcement from Governor Mike DeWine and the company on Tuesday.

They’re putting $4.4 billion into the state’s economy, most of it to build a vehicle battery plant southwest of Columbus near Jeffersonville and I-71.

And the company will retool three existing plants in the Columbus area to assemble electric vehicles.

Construction of the battery plant begins next spring, with production starting in 2024.